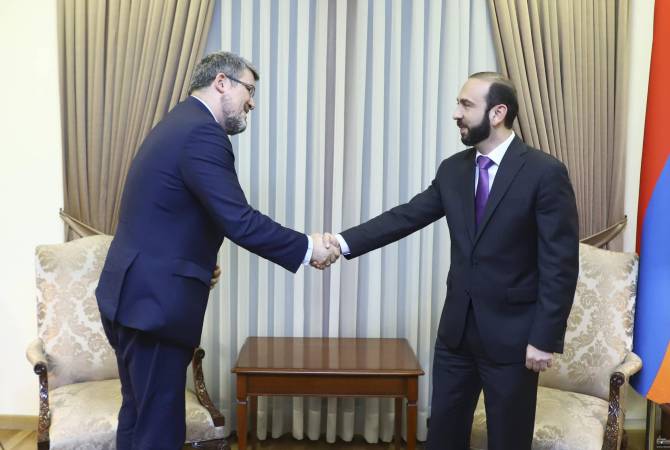 
YEREVAN, JUNE 30, ARMENPRESS. Political consultations between the Ministries of Foreign Affairs of the Republic of Armenia and the Republic of Serbia took place in Yerevan on June 30. The Armenian delegation was headed by Deputy Foreign Minister Paruyr Hovhannisyan, the Serbian State Secretary Nemanja Starović.

As ARMENPRESS was informed from the press service of MFA Armenia, recording the high-level political dialogue between Armenia and Serbia, the sides discussed the opportunities and the practical measures to deepen the friendly Armenian-Serbian relations and strengthen the interstate ties.

A number of international and regional issues were touched upon during the consultations. Reference was made to Armenia's steps aimed at establishing peace and stability in the South Caucasus region. The Armenian side stressed the need to repatriate Armenian prisoners of war, hostages and other detainees in the context of humanitarian issues resulted by the 44-day war unleashed by Azerbaijan, as well as the preservation of Armenian cultural and religious heritage in Azerbaijani-held territories.

At the end of the consultations, the Serbian delegation was received by the Minister of Foreign Affairs of the Republic of Armenia Ararat Mirzoyan. Minister Mirzoyan highlighted the mutual visits and contacts at different levels, aimed at the continuous expansion of the political dialogue between the two countries and the outlining of new directions of mutually beneficial multifaceted cooperation.