Int’l relations will begin to develop in shadow of war: Yerevan hosts discussion attended by experts 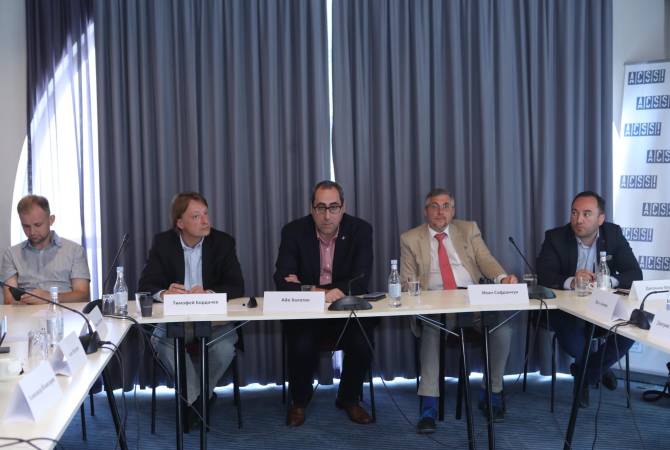 
YEREVAN, JULY 2, ARMENPRESS. Russia and Armenia have created such close, friendly and allied relations at different levels that it is possible to discuss problems and move forward without additional emotions, Timofei Bordachev, Programme Director of the Valdai Discussion Club, said at a roundtable in Yerevan today on the topic of the resilience of Russia and the West in Ukraine and its impact on the post-Soviet space.

“Our countries have formed very close relations in different areas - political, military-political, economic and most importantly, humanitarian. Russia’s presence in Armenia, and Armenia’s presence in Russia are very important. The friendly ties exist in the bilateral relations and the Eurasian platform. We appreciate it, it allows us to calmly discuss the issues without emotions where our views are different. We understand that these issues could also be part of the friendly, close and allied relations. All issues could be discussed and moved forward”, he said.

Touching upon the global developments and conflicts, Timofei Bordachev said the world is going to live in a period of quite active military conflicts in coming years, if not in coming decades. However, he stated that this doesn’t mean that a global disaster will happen. According to him, conflicts will continue, and the countries, that are part of that regions, will feel their effect. The other countries of the world will also feel that. He stated that now the international relations of countries will start developing in the shadow of war.

“One of the main tasks of Russia, Armenia and other countries will be to raise the level of domestic stability. The conflicts will continue, the wars are inevitable, and we should live with them”, he said.

Ivan Safranchuk, Director of the Center of Eurasian Research at Moscow State University of International Relations, said all understand well that they are at a point where they would not like to be.

“Due to the developments, the situation became more clear, many issues were clarified for us. We should avoid llusions. Through various thesis an attempt is made to cause fear among post-Soviet countries and not only. Our internal feeling is that Russia is ready to give much greater freedom to the post-Soviet countries, but when we are told that no, you are en empire that is trying to capture and isolate everyone from the outside world, this has nothing to do with what we see. Moreover, I would like to note that the Eurasian integration, that is implemented in recent period, has been formed on the basis that we are ready to share our economic growth with the post-Soviet countries”, Safranchuk said.