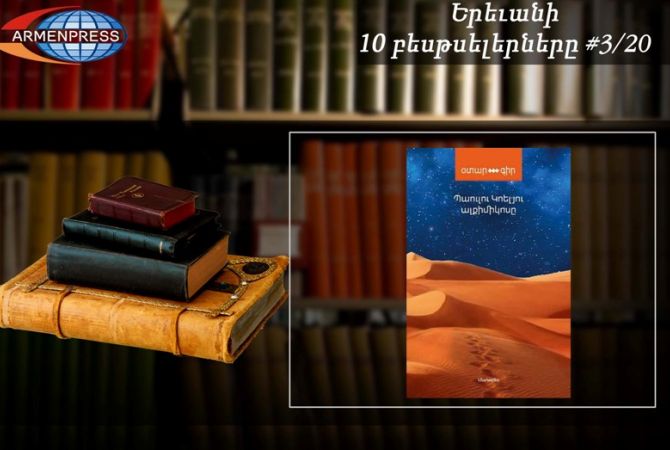 
YEREVAN, JULY 10, ARMENPRESS: This week the rating list of the Yerevan Bestseller, represented by Armenpress News Agency, is headed by "The Alchemist" novel by contemporary Brazilian author Paulo Coelho. This book has been translated into 67 languages and according to AFP, it has sold more than 30 million copies in 56 different languages, becoming one of the best-selling books in history and winning the Guinness World Record for most translated book by a living author. An allegorical novel, The Alchemist follows a young Andalusian shepherd named Santiago in his journey to Egypt, after having a recurring dream of finding treasure there. The Alchemist follows the journey of an Andalusian shepherd boy named Santiago. Santiago, believing a recurring dream to be prophetic, decides to travel to a Romani in a nearby town to discover its meaning. A gypsy woman tells him that there is a treasure in the Pyramids in Egypt. Early into his journey, he meets an old king, Melchizedek, who tells him to sell his sheep to travel to Egypt and introduces the idea of a Personal Legend (which is always capitalized in the book). Your Personal Legend "is what you have always wanted to accomplish. Everyone, when they are young, knows what their Personal Legend is". He adds that "when you want something, all the universe conspires in helping you to achieve it". This is the core theme of the book.

The second horizontal is occupied by "The Little Prince" by French author Antoine de Saint-Exupéry, re-published by “Antares” and “Edit Print”. The novella is both the most read and most translated book in the French language, and was voted the best book of the 20th century in France. The book was translated into more than 190 languages and dialects, as well as Braille. Over 80 million examples of the book were sold. It had several publications in Armenian. Saint-Exupéry, a laureate of several of France's highest literary awards and a reserve military pilot at the start of the Second World War, wrote and illustrated the manuscript while exiled in the United States after the Fall of France. He had travelled there on a personal mission to persuade its government to quickly enter the war against Nazi Germany. In the midst of personal upheavals and failing health he produced almost half of the writings he would be remembered for, including a tender tale of loneliness, friendship, love and loss, in the form of a young prince fallen to Earth.

The bestseller of Umberto Eco “The name of the Rose”, characterized as a philosophical or theological detective, taking place in the 14th century, has a value of an encyclopedia covering all layers of the medieval world and comes the 3rd in the books list. The new “The name of the Rose”, where the author made some editorial and linguistic corrections, some cuts, particularly in terms of citations in Latin, was published in 2013 and after French, the Armenian is the second language, into which it was translated.

The first work of the late experienced lawmaker and political figure Vahan Hovhannisyan “Mandylion” occupies the fourth place of this week's "Bestseller Books List" introduced by Armenpress News Agency. The actions in the book are taking place on a broad historic base, including different ages. At the Awards ceremony Vahan Hovhannisyan got a prize “The Bestseller of the Year” for “Mandylion”.

“My Name Is Red” by writer Orhan Pamuk was also included in the rating list. At once a fiendishly devious mystery, a beguiling love story, and a brilliant symposium on the power of art, My Name Is Red is a transporting tale set amid the splendor and religious intrigue of sixteenth-century Istanbul, from one of the most prominent contemporary Turkish writers.

“The Book of Lamentations'' by St. Gregory of Narek published by “MHM” and “Zangak” publishing houses occupies the next position of the list. The mystical poem "Book of Lamentations" has been translated into many languages and has played a significant role in the development of the Armenian literary language. In 95 grace-filled prayers St. Gregory draws on the exquisite potential of the Classical Armenian language to translate the pure sighs of the broken and contrite heart into an offering of words pleasing to God. The result is an edifice of faith for the ages, unique in Christian literature for its rich imagery, its subtle theology, its Biblical erudition, and the sincere immediacy of its communication with God. This masterpiece by St. Gregory of Narek has always been included in our bestseller books list.

“Who Moved My Cheese?” by Dr. Spencer Johnson is one of the most read books in the world. With Who Moved My Cheese? Dr. Spencer Johnson realizes the need for finding the language and tools to deal with change--an issue that makes all of us nervous and uncomfortable. Most people are fearful of change because they don't believe they have any control over how or when it happens to them. Since change happens either to the individual or by the individual, Spencer Johnson shows us that what matters most is the attitude we have about change. When the Y2K panic gripped the corporate realm before the new millennium, most work environments finally recognized the urgent need to get their computers and other business systems up to speed and able to deal with unprecedented change. And businesses realized that this was not enough: they needed to help people get ready, too. Spencer Johnson has created his new book to do just that. The coauthor of the multimillion bestseller The One Minute Manager has written a deceptively simple story with a dramatically important message that can radically alter the way we cope with change. Who Moved My Cheese? allows for common themes to become topics for discussion and individual interpretation.

"Love in the Time of Cholera" by García Márquez comes the 8th. The book was translated from the original by Frunzik KIrakosyan. In their youth, Florentino Ariza and Fermina Daza fall passionately in love. When Fermina eventually chooses to marry a wealthy, well-born doctor, Florentino is devastated, but he is a romantic. As he rises in his business career he whiles away the years in 622 affairs--yet he reserves his heart for Fermina. Her husband dies at last, and Florentino purposefully attends the funeral. Fifty years, nine months, and four days after he first declared his love for Fermina, he will do so again.

“Mother” by Henri Verneuil occupies the 9th place. It is a moving saga about the fate of the Armenian family which found a shelter in France. In the unknown world of indifference and coldness a handful of people rely on their diligence and goodness, thus winning their right to survive. Henri Verneuil was born on October 15, 1920 in Rodosto, Turkey as Achod Malakian. He was a director and writer, known for The Sicilian Clan (1969), The Night Caller (1975) and I as in Icarus (1979). He died on January 11, 2002 in Bagnolet, Seine-Saint-Denis, France. It was at the tender age of 4 that Achod Malakian arrived with his family in Marseille, joining thousands of Armenians in fleeing the Turkish government's massacres of their people. As Henri Verneuil, at the end of his life, he devoted his two final full-length features to this part of his childhood and heritage. Born in Turkey and was a naturalized French citizen of Armenian ancestry. Former journalist, editor, film critic and radio commentator. Directed his first short film in 1946, his first motion picture six years later. Best known for his popular thrillers and action films, frequently starring Jean Gabin.

The rating list is concluded by "Charents-Name" by Gourgen Mahari. One cannot find any other two names, which will be so closely tied with each other spiritually and personally, as Yeghishe Charents and Gourgen Mahari. Charents was one of the most outstanding poets of the twentieth century, touching upon a multitude of topics that ranged from his experiences in the First World War, socialism, and, more prominently, on Armenia and Armenians. His works were translated by Valeri Bryusov, Anna Akhmatova, Boris Pasternak, Louis Aragon and others. His famous poems are: Three songs to the sad and pale girl...", poems (1914), "Blue-eyed Homeland", poem (1915), "Soma", poem (1918), "Charents-Name", poem (1922), "Country of Nairi" (Yerkir Nairi) (1926), "Epical Sunrise", poems (1930), "Book of the Way", poems (1933-34), and many others.