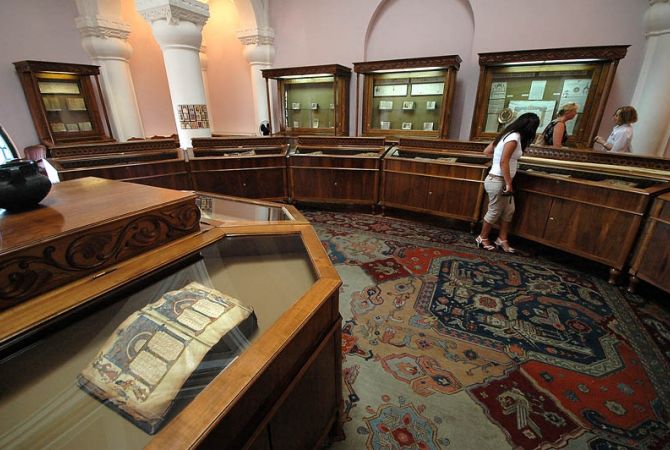 
YEREVAN, JULY 23, ARMENPRESS. Scientific Research Institute of Ancient Manuscripts named after Mesrop Mashtots has been recently replenished with valuable works of Iranian-Armenian photographer Antoin Sevruguin and painter Andre Sevryugin. Matenadaran informed Armenpress that the donation was done by the heir of the Sevruguin  Emanuel Sevruguin.

A year ago, in 2014 Matenadaran made an agreement with the citizen of Germany, Emanuel Sevruguin, according which the latter donates to Matenadaran a collection of paintings and photos inherited from his mother and grandfather. The collection includes more than 100 works of art.

Born into a Russian family of Armenian-Georgian origin in the Russian embassy of Tehran, Iran: Antoin Sevruguin was one of the many children of Vasily Sevryugin and a Georgian Achin Khanoum. Vasily Sevryugin was a Russian diplomat to Tehran. Achin had raised her children in Tbilisi, Georgia, because she was denied her husband’s pension. After Vassil died in a horse riding accident Antoin gave up the art form of painting, and took up photography to support his family.

His brothers Kolia and Emanuel helped him set up a studio in Tehran on Ala al-dawla Street (today Ferdowsi St.).

Many of Antoin’s photographs were taken from 1870-1930. Because Sevruguin spoke Persian as well as other languages, he was capable of communicating to different social strata and tribes from his country Iran. His photos of the royal court, harems, and mosques and other religious monuments were compared to the other Western photographers in Persia. The reigning Shah, Nasir al-Din Shah (reigned from 1846–1896) took a special interest in photography and many royal buildings and events were portrayed by Sevruguin.