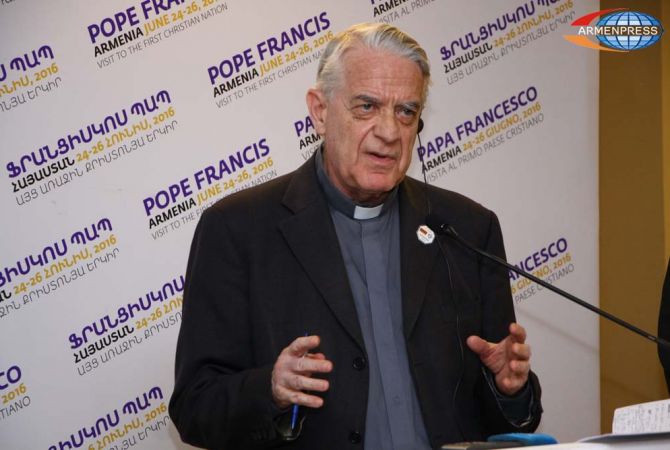 
YEREVAN, JUNE 24, ARMENPRESS. Pope Francis had planned in advance to use the formulation “Medz Yeghern” during his speech at the Presidential Palace of Armenia, but during the speech he changed his mind and used the word “Genocide”, director of the Vatican’s Holy See Press Office Federico Lombardi told the reporters in Yerevan media center, referring to the question how it happened that in the text provided to press representatives “Medz Yeghern” was written, while the Pope used the word “Genocide” in his speech. “The Pope had confirmed all the texts; he had said “This is the one I am going to pronounce”. We have always provided you with the texts of his speeches, but we always said that the Pope can always change even the entire text in the last moment. We provide you with the text and urge you to be attentive, as he can give a surprise at any moment. This times the Pope decided to add that word”, “Armenpress” reports Lombardi clarifying.

To the question if Vatican expects any reaction from Turkey, considering the fact that when the Pope spoke about the Armenian Genocide last year, Turkey called back its Ambassador in Vatican, Lombardi answered, “I cannot speak for Turkey. I can say what Pope said, and he always speaks for peace and reconciliation between different nations and cultures. During his current visit he was again guided by that spirit and will continue the same way. I believe there are numerous Armenians and Turks that have good relations with each other.  We must always remember the past to prevent new wars; we must take lessons from the past which will allow us to avoid their reoccurrence. This is what Pope said. Many have not taken lessons from the past yet. We must remember all this for the sake of peace, but not igniting new conflicts”.

Lombardi focused on the fact that Pope Francis not only once again used the word “Genocide”, but stated that the Armenian Genocide was the first catastrophe and tragedy of the 20th century.