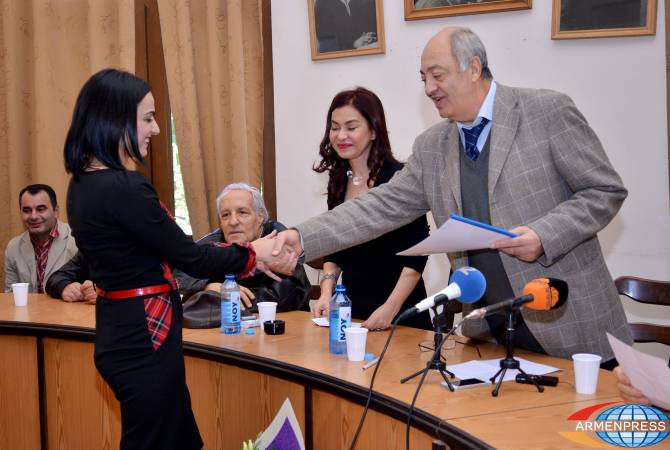 “The award is sponsored by poetess, prose writer Natela Lalabekyan. After the death of Levon Ananyan Natela decided to organize such an event aimed at discovering young writers. Prizes are awarded for prose and poetry nominations, but we also made a decision to organize the first round of the award in provinces aimed at making the writers of the provinces taking part in this event”, President of the Writers’ Union of Armenia Eduard Militonyan said.

In prose nomination, Srbuhi Khachatryan was awarded with the third prize for a series of prose poems. The second place was captured by Mariam Sargsyan, and Gayane Hovhannisyan took the first place. Loreta Muradyan captured the third place in poetry nomination.

Natela Lalabekyan congratulated the laureates and said they will achieve success in case of being able to connect the inner world to the outside world. Lalabekyan expressed hope that writing for the laureates is not just a hobby, and they will reach success and will deserve the prize after Levon Ananyan.

“I am happy to see that this year female representatives receive prizes. This shows that our literature is being enriched by female writers. I think my father would be happy to see this”, Ananyan said. He thanked the event organizes and stated that ARMENPRESS news agency is always ready to assist young writers.