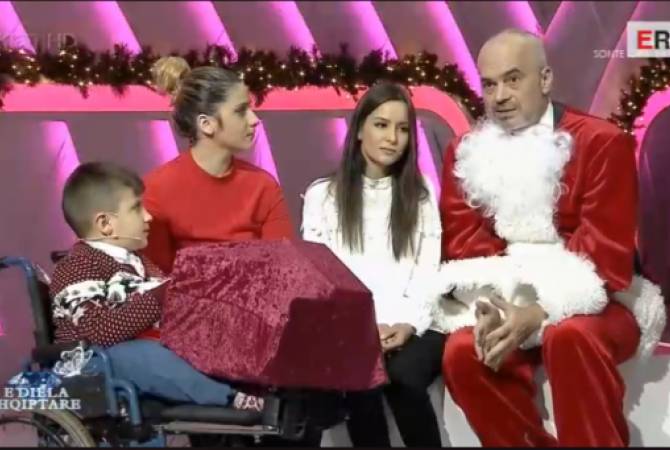 TIRANA, JANUARY 8, ARMENPRESS/ATA. Albanian PM, Edi Rama, has acquired a reputation among the Albanian and foreign public alike for his particular approaches as part of his duty at the helm of the government.
This distinctive trait drew attention when Edi Rama took office as Tirana mayor. The Albanian public was amazed by his style, which looked weird in their eyes at that time.
Reconstruction of Tirana’s apartment blocks and his style would be soon identified with a blaze of color, which won widespread public opinion.
Edi Rama caught the eye of foreign public opinion when he was elected PM of Albania. Wearing sneakers in formal meetings was not only something of a novelty to the style of a PM.

The foreign commentators think that he intended to send out the message that Albania has not time to lose. It has to run down its path to EU integration.
This year, Edi Rama, would surprise Albanians once again. In one of the most popular broadcasts, Rama was dressed up as Santa Claus to grant Leo’s wish.
The small boy at the age of 9, who was born a paraplegic, had sent a letter to Santa Claus asking for a physical therapist and a car to take him to school every day.
On this broadcast, PM Rama dressed up as Santa Claus listened to the stories of both Leo and Eriglisa, a 26 year youngster from Egyptian community whose wish was to hand out gifts to the children of this community on New Year’s Eve.
The “Santa Claus” PM committed himself to helping Leo, providing him not only with the daily transport to school but also with a physical therapist to promote his ability to move.
Not only did Rama fulfilled the wish of Eriglisa Lami to hand out gifts to the children of Roma and Egyptian community, he surprised her with another decision, her appointment as advisor to Minister of Health and Social Protection about the issues of this community.
“Albania today is like the home of a family grappling with multiple problems, but it is up to this famil y to make its choice whether it will give in or fight together in order to pave the way and build a safer future for the next generation,” said Rama who fulfilled the dreams and wishes of Leo and Eriglisa.