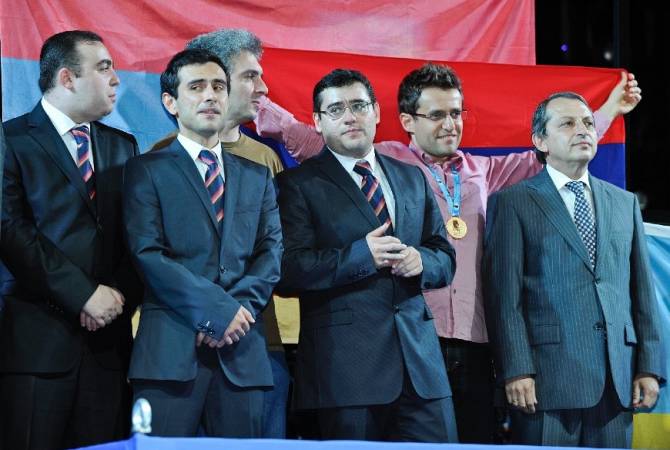 
YEREVAN, APRIL 20, ARMENPRESS. The chess team members of Armenia have congratulated Serzh Sargsyan on the election to the post of Prime Minister of Armenia by the parliament and expressed support. ARMENPRESS reports the chess players have issued a statement.

“The third President of the Republic of Armenia, President of the chess federation of Armenia Serzh Sargsyan was elected to the post of the Prime Minister of the Republic of Armenia days ago, for which we congratulate Serzh Sargsyan and express our support for him for the welfare of our country and people. Having worked with Serzh Sargsyan for long years we, the chess players, have felt his readiness and devotion more than everyone to do everything for the achievements of Armenia and the Armenian people. All these have been proved numerous times by our achievements for which we have had numerous opportunities to be proud of our country, the creative and intellectual potential of our people. It’s just with the guidance of Serzh Sargsyan that the chess team of Armenia 3 times won the Olympic champion and once won the title of World Champion, in fact becoming the most reputable team. We are convinced that our present and future achievements in the sphere of chess have been obtained also due to our internal belief and confidence that we are all unified in our Motherland and we present one and the same power standing side by side. Today we once again want to reaffirm the conviction that our internal unity and power have been and will be the guarantee of our victories. Considering the developments in our country these days we call on all the sides to remain in the limits of reasonability and faithful to the spirit of the exceptional national solidarity. We assess inadmissible all the steps, calls and actions that can harm our country and any member of our public. We are confident that no right should be restrained, at the same time the implementation of any right should never violate others’ rights and put an end on our achievements. We are convinced that as a chess superpower, we will be able the best solution to the situation with joint efforts”, reads the statement.