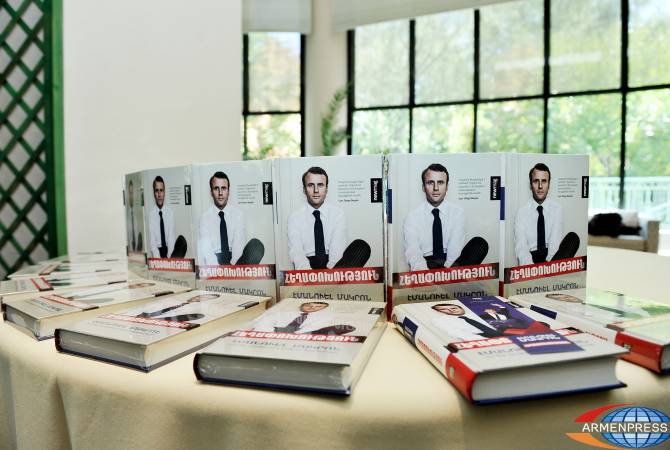 
YEREVAN, OCTOBER 3, ARMENPRESS. The presentation of the translations of French President Emmanuel Macron’s book “The Revolution” took place in Armenia. In his book Macron tells his life story and what inspires him. He presents his visions on the future of France in the changing world.

ARMENPRESS reports the book was published by “Newmag” company ahead of the Francophonie summit and the 1st state visit of Emmanuel Macron to Armenia.

Ambassador of France to Armenia Jonathan Lacôte said during the presentation that it’s a rare thing when a politician’s book is translated. “Such pieces are usually for domestic use, but the Armenian translation speaks much about the relations of the two countries”, he said.

Macron’s book “The revolution” was published in French in November, 2016 and it became a bestseller in France the same year. Over 2 million copies have been sold. The book has been translated almost into all European languages.

The Armenian translation was possible thank to the funding of the Ministry of Culture of Armenia and the support of ACBA Credit Agricole Bank. It’s already sold almost in all Yerevan bookshops. Edited and translated by Tigran Sirekanyan