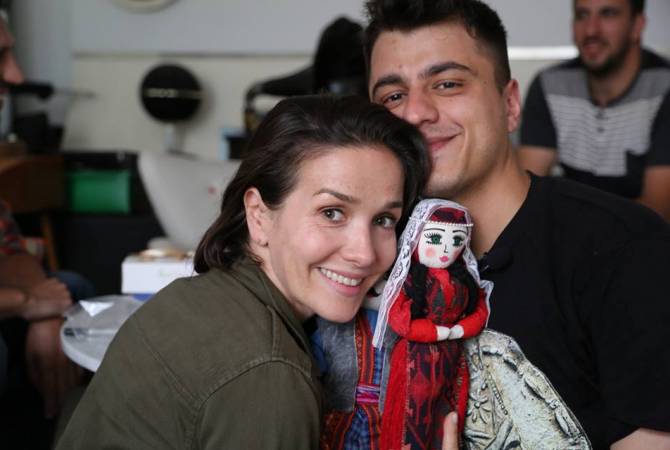 
YEREVAN, JANUARY 29, ARMENPRESS. Many people around the world dream about meeting their beloved musician, actor or TV personality. Harut Markosyan from Armenia is one of them. But he is among the very few whose dream has come true. Markosyan’s favorite singer is Uruguayan Natalia Oreiro, and in a fascinating twist of destiny the young man ended up meeting her in person, and even singing together. He also took the chance to teach Oreiro some Armenian.

“Everything began in Armenia. Representatives of one of the leading radio stations of Uruguay where in Armenia for a special project. Thanks to them I talked with Natalia Oreiro live on air at their own radio. Through great difficulties and efforts were they ale to organize the virtual conversation. We spoke and sang on live air. This all was actually like a dream,” Harut says.

After this, the Armenian fan of Oreiro continued keeping in touch with the radio representatives, and he even regularly performed on air. In 2017, he was invited to Argentina and Uruguay. In Argentine, he visited the Las Oreiro boutique, a store owned by Natalia Oreiro. While already in Uruguay, where the man was already pretty popular, the most unexpected thing happened.

“The most beautiful surprise of my visit was the meeting with Natalia Oreiro. It was truly an unforgettable day. We met at her studio. She had prepared surprises for me. Initially, she and her musicians welcomed me by singing my favorite song, which we had performed together live on air earlier,” he said.

Harut had also prepared his own surprises for Natalia. He gave her Armenian gifts, even taught to speak Armenian. Harut told the singer about Armenia and said that she is very much loved here, and people in Armenia would love to see her perform in their country.

And the story didn’t end there.

Natalia Oreiro said she will gladly perform in Armenia.

Her concert is scheduled to take place in Yerevan on April 7.