Armenia has every chance to become one of important tech centers globally, PM says at WCIT 2019 | ARMENPRESS Armenian News Agency

Armenia has every chance to become one of important tech centers globally, PM says at WCIT 2019 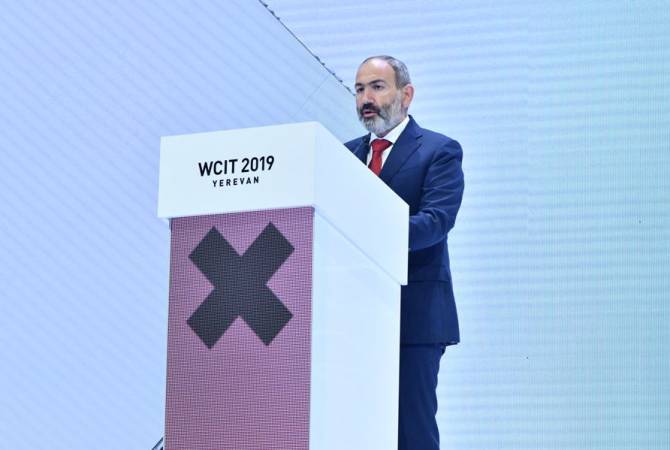 
YEREVAN, OCTOBER 7, ARMENPRESS. Armenia has all opportunities to become one of the important technology centers, Prime Minister Nikol Pashinyan said in opening remarks at the WCIT 2019 in Yerevan.

“It is a great honor for us to host this kind of a congress. It is a very good occasion to speak with you and through you with the international community about our strategy on turning Armenia into a high tech industrial country. I hope that during the several days that you will spend in our country you will feel the new energy and atmosphere which has environed our country after the non violent, velvet, people’s revolution that took place last year in Armenia. I would like to emphasize that this revolution took place through de-centralization, which resulted in Armenia becoming the center of democracy on the world map,” the Armenian PM said.

He noted that after this political revolution Armenia is currently at the phase of an economic one, which again is taking place due to de-centralization because the government considers the main means of an economic revolution to be every citizen’s individual effort, individual initiative which they make not at the instructions of the government but by their own personal decisions, their personal goals and ambitions.

He said that at this moment the economic growth stands at 7%, 13% growth has been recorded in the tourism sectors. Impressive growth is recorded also in technological production exports. Exports in this direction grew 40,9%, while exports of high tech productions grew 34,4%.

“This all gives us confidence to say that the ongoing economic revolution will in turn lead to a technological revolution. We will be able to turn Armenia into one of the technological innovations leader in the world, a true technological center,” he said.

PM Pashinyan emphasized that this goal seems reachable and realistic also for the reason that numerous Armenians have invented famous technological innovations.

In 1853, Hovhannes Ghukasyan invented the kerosene lamp, in 1854 Kristapor Ter-Serobyan created the US dollar’s green color which up to this day is considered the exclusive color of the currency. In 1911, Gabriel Kazanchyan invented a hair dryer, in 1916 Stepan Stepanyan invented the mechanical concrete mixer. In 1939, Luther Simjian created the ATM.

“The list can go on, recalling the inventor of the world famous MIG aircraft Artyom Mikoyan, creator of the US Army gas mask Artur Blbulyan, one of the co-founders of plastic surgery Varazdat Kazanchyan and others. This all, and the fact that the first Soviet computer named Nairi was created in Armenia, that numerous of our countrymen have had practical participation in American and Soviet space programs, the fact that today also our countrymen have recorded serious successes in the technology and innovations sector, gives us confidence that Armenia will become one of the important technology sector centers in the world,” the PM said.