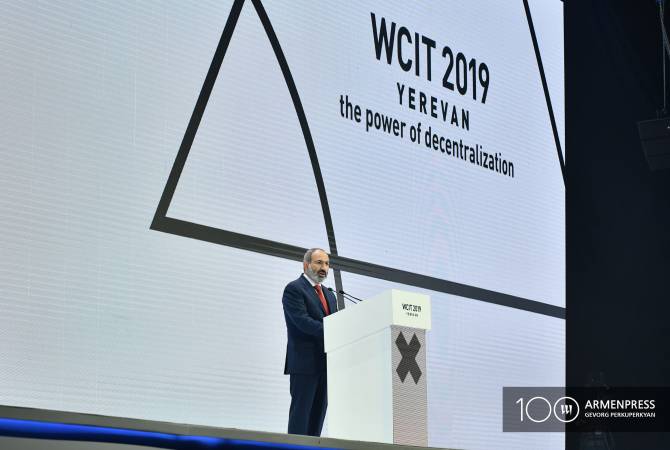 
YEREVAN, OCTOBER 7, ARMENPRESS. IT industry in Armenia grew by nearly five times in the past seven years and every year is recording a 20-25% stable growth, Prime Minister Nikol Pashinyan said in his remarks at the official opening ceremony of the World Congress on Information Technology (WCIT) launched in Yerevan.

“Armenia has envisaged comprehensive tax privileges for the newly created technological companies which are exempt from profit tax until 2023 and pay only 10% in income tax. As an outcome, the IT industry grew by five times in the last seven years and is recording a stable 20-25% growth every year. We have put a task to seriously develop education, starting from pre-schools up to master’s degree, etc. And we say that education in our country should become a national lifestyle, with the logic that person should never stop learning. And the educational, professional level of all of us, starting from the prime minister up to the computer operator, should be higher every next day”, the Armenian PM said.

Pashinyan said Armenia can become a paradise for the talented people. According to him, like for many years many different countries of the world provided an opportunity to the Armenians who survived the Genocide to develop their own talent, get an education and make a discovery, now as well the free and developing sovereign Armenia is becoming a more attractive country for technological, educational and innovative investments.

“Months before we have set up the Ministry of High Technological Industry so that those interested in the field concretely know what is their “address” in Armenia. Dear guests, I wish all of us success in making the world more humanitarian, more God-fearing, civilized, tolerant through high technologies”, the Armenian PM stated.