Masterminds of 1999 parliament attack will be brought to justice, vows Speaker Alen Simonyan 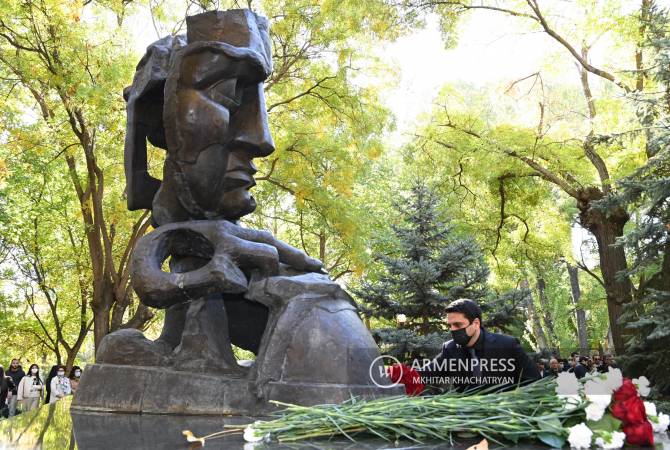 
YEREVAN, OCTOBER 27, ARMENPRESS. The incumbent government will do everything in order to bring to justice the masterminds of the 1999 parliament shooting, Speaker of Parliament Alen Simonyan said after a commemoration event.

Asked whether or not their political team had the goal of re-opening the investigation to reveal the potential plotters of the assassination who are still at large, Simonyan said: “I think that our society knows the main reasons, main participants and the issues which have been left open, like they knew that the elections were being rigged for more than 20 years. I find it needless to voice names now, but I assure you that we will all have the answers to these questions also from the legal perspective.”

He noted that as a government official he doesn’t have the right to make any statement which would be deemed as containing accusations and would potentially impact any possible future legal process. “But politically I already said that it is natural that the main actors are convicted and jailed. Today we must understand the reasons, the true instigators, the people who perhaps had either political or non-political interests from that all. And our society knows the interests of those people, and I think I am entitled to voice this now,” he said.

He didn’t rule out the possibility that the 1999 assassination of Prime Minister Vazgen Sargsyan and Speaker Karen Demirchyan, and several other government officials could had been linked with the purported plan on “exchanging Meghri”.

“The situation which we have today pertaining to the war began on October 27, 1999. If the October 27 [attack] didn’t happen, we wouldn’t have reached this situation,” he said.

“We will do everything in order for the masterminds to appear behind bars, I think no one should have doubts about this. What happened [on October 27] broke the backbone of our statehood. We are still reaping the consequences of everything that happened on October 27. This is what we should be careful of, we should think that at some moment this process must come to an end, because the flywheel which started on October 27 of 1999 is unfortunately still spinning and having its consequences to this day,” Simonyan said.

The Speaker of Parliament said that the current opposition ought to avoid speaking about the October 27 attack because it had happened during their tenure as government. “Both the society and all of us can have many questions, for example why the National Security Service director was not in attendance in parliament on that day,” he said.

22 years ago on this day, a group of five heavily armed gunmen led by Nairi Hunanyan stormed into the parliament while it was in session and assassinated Prime Minister Vazgen Sargsyan, Speaker Karen Demirchyan, Deputy Speakers Yuri Bakhshyan and Ruben Miroyan, as well as three lawmakers and a Cabinet member. The gunmen held the remaining MPs in parliament hostage until surrendering to authorities the next day.