We have shared understanding on the opening of regional infrastructures – Pashinyan 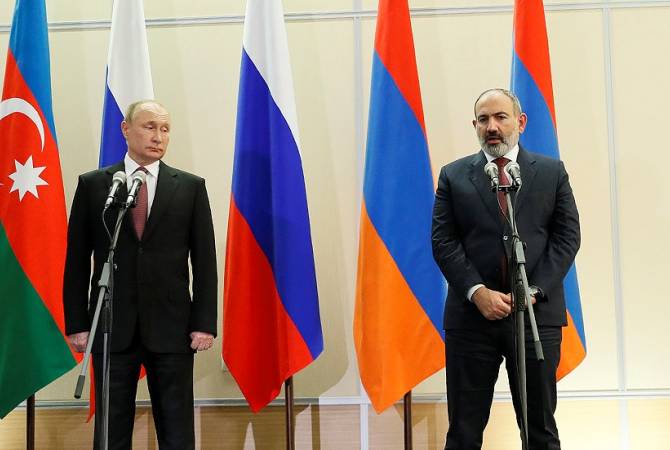 
YEREVAN, NOVEMBER 26, ARMENPRESS. The Prime Minister of the Republic of Armenia Nikol Pashinyan, the President of the Russian Federation Vladimir Putin, the President of Azerbaijan Ilham Aliyev summed up the results of the trilateral meeting in Sochi and made statements for the press.

As ARMENPRESS was informed from the Office of the Prime Minister, Nikol Pashinyan’s statement runs as follows,

Let me thank you once again for the invitation, and of course, for the positive working atmosphere.

I want to confirm that we had a very positive meeting, conversation, actually discussed all the issues on the agenda. This was not a meeting to hide the problems, but a meeting where we openly discussed all the issues. And I would like to positively assess the fact that we clarified the positions on many issues, and it turned out that we do not have any misinterpretation on a number of issues, opposite to what it seemed before this meeting.

I would like to mention that, in fact, in connection with the opening of all transport and economic communications in the region, we registered that we have a shared idea of how those communications will operate.

The topic of starting the process of delimitation and demarcation is not new, we have discussed that issue. We also adopted a trilateral statement, in which we stated that before that the necessary conditions should be created, that is, security mechanisms should be created on the border between Armenia and Azerbaijan.

Of course, humanitarian issues were also touched upon.

In general, I assess today's conversation and meeting very positive. I would like to once again thank our strategic ally, the Russian Federation, for the initiative. I think that if we manage to establish certain dynamics of our dialogue on the basis of this meeting, we can also expect concrete results.

I reaffirm the readiness of Armenia and the Government of Armenia, which has received a mandate from the people of Armenia, to open an era of peaceful development for our country and our region. We are interested in that, and of course, today's meeting contributed to the fulfilment of that agenda.