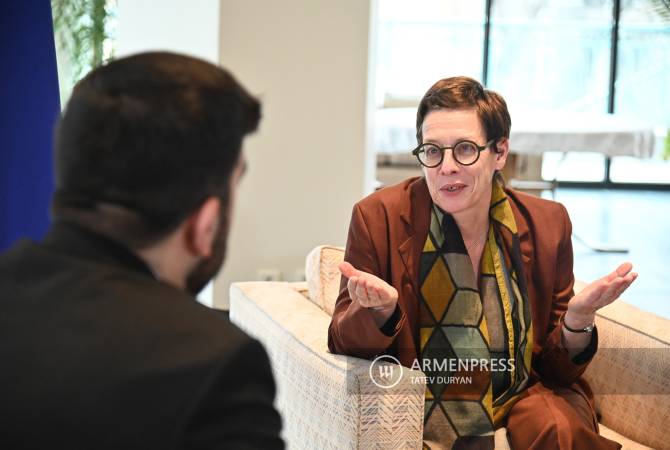 
YEREVAN, MARCH 9, ARMENPRESS. France wants to strengthen its relations with Armenia, help Armenia to further develop, to open itself to the world, Ambassador of France to Armenia Anne Louyot said in an interview with ARMENPRESS on the occasion of the 30th anniversary of the establishment of diplomatic relations between Armenia and France, emphasizing the importance of the Armenian-French relations for the two countries.

Ambassador Anne Louyot has been working in Armenia for only six months, but she has already managed to love our country. "Armenia is one of my favorite countries in the world”, she says.

Noting that Armenia has faced many difficult challenges recently, the French Ambassador stressed that Armenia is also a country of great opportunities, and her role is to mobilize all actors in French-Armenian relations so that Armenia opens up to the world and faces its future more positively. 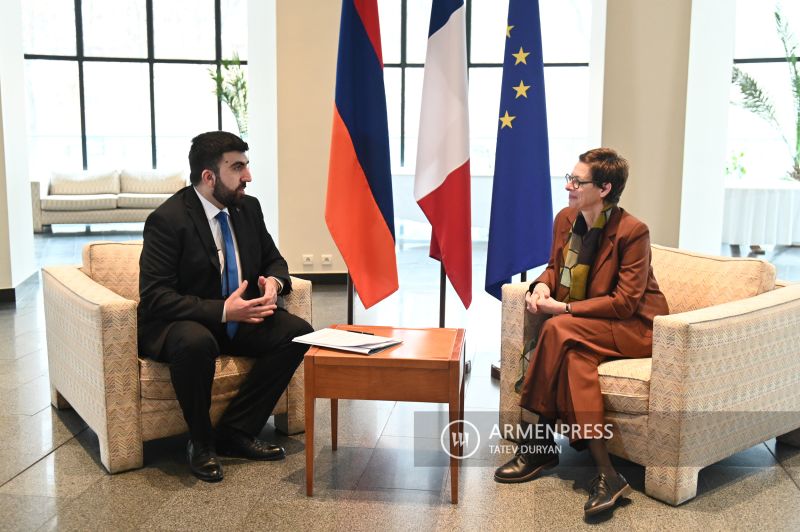 - Hello, Madam Ambassador. Thank you for the unique opportunity to interview you. After the end of Jonathan Lacôte’s mission, you have been the Ambassador of France to Armenia since September 2021. How did these 5-6 months go? How do you feel in Armenia? I wonder what you knew about our country before being appointed Ambassador, what new things did you learn?

- Hello, thank you for this opportunity to talk to you about the 30th anniversary of the establishment of Armenian-French diplomatic relations. During these six months I have learned a lot about Armenia, I can say that Armenia is already one of my favorite countries in the world. Armenia has faced many difficult challenges, but it is also a country of great opportunities. My role here is to mobilize all the actors in the Armenian-French relations to help Armenia open up more and face the future more positively.

- Here, during the event held at the embassy on February 24, you stressed in your speech that many prominent figures symbolize the centuries-old Armenian-French friendship, mentioning particularly two of them: World War II hero Missak Manouchian and Admiral Louis Dartige du Fournet, commander of the French navy that saved the population of Musaler (Musa Dagh). I wonder who you will mention in this series besides them.

- Thank you for this question. Yes, I talked about Missak Manouchian, and Dartige du Fournet, one of the heroes of Musa Dagh's self-defense, but, of course, there are many other symbolic figures in that line. I can not fail to mention Charles Aznavour, who has a very important role in the Armenian-French relations. In addition to being a great French artist of Armenian descent, Charles Aznavour has also played a major role in Armenia since the 1988 earthquake. I can also mention many other French-Armenian artists, for example, the famous photographer Antoine Agoudjian or actors, film directors such as Serge Avédikian, Simon Abgarian, Henri Verneuil.

- Unfortunately, Aznavour is no longer with us, unfortunately, he did not fulfill his promise and did not live 100 years, though we all seemed to believe in that. And that powerful link between Armenia and France has at least been physically severed. It is interesting whether after the end of his earthly life attempts were made to re-evaluate his role and significance not only in French culture, but also in Armenian-French relations.

- I think his important role in both French culture and Armenian-French relations has always been properly appreciated both in France and in Armenia, and his role continues thanks to the Aznavour Foundation, which is very active in Armenia.

- Aznavour had a very interesting answer to the question whether he is more Armenian or French. He said it is like coffee with milk, it is impossible to separate. What is your opinion on this issue?

- I will always remember Aznavour's statement "I am 100% French, I am 100% Armenian." You know that there are many French people who have Armenian roots. Their number is 500-600 thousand in France. They are French, but Armenia is very important for their identity.

- How would you assess the role of the Armenian community in France today in public, political and other spheres?

- The Armenian community is a very important factor in strengthening the Armenian-French relations. For example, it actively participates in decentralized cooperation, I mean the development of cooperation between French and Armenian cities and regions. We have a total of about 40 agreements, the Armenian community actively participates in them and plays a big role in that regard. The Armenian community also plays an active role at the associative level. For example, during and after the 44-day war in 2020, many Armenian Diaspora organizations organized numerous rallies in solidarity with Armenia. I can mention, for example, the Aznavour Foundation, which we have already talked about, the Santé Arménie organization, which was very active, as well as the French branch of the UGAB Association.

- How would you describe the Armenia-France interstate relations, the Armenian-French relations in general? In other words, what is the significance of France and Armenia for each other?

- The Armenian-French relations are very important. On February 24, we marked the 30th anniversary of the establishment of Armenian-French diplomatic relations. Our relations have a long history of friendship, in which, as we have already mentioned, the Armenian community of France also plays a big role. But they are also based on the mutual readiness of the governments of the two countries to cooperate in various fields. We have a high-level political dialogue. You know that France, as the Co-chair of the OSCE Minsk Group, plays an important role in the settlement of the conflict between Armenia and Azerbaijan.

There is also significant educational and cultural cooperation. Armenia is also a member of the International Organization of La Francophonie, we work closely with the Armenian side to promote the teaching of French and French culture in Armenia.

French companies in Armenia play an important role in the development of the economic sphere. I can mention, for example, Veolia, Carrefour, Amundi ACBA. 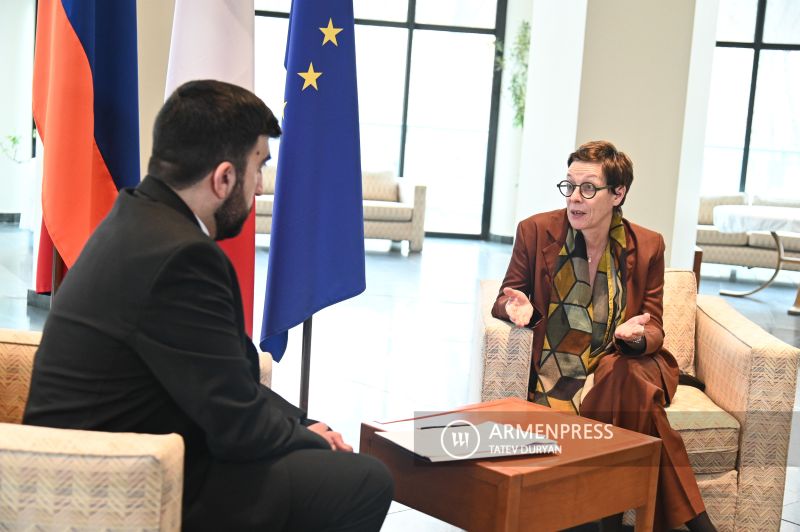 Besides, the Minister of Foreign Affairs of Armenia Ararat Mirzoyan and the Secretary of State of the Ministry of Foreign Affairs of France Jean-Baptiste Lemoyne signed a very important and ambitious roadmap for the economic sphere in December, 2021. We want to further strengthen our economic cooperation, as well as help the Armenian government to develop Armenia further and open itself to the world.

- Can you clarify on what road map Jean-Baptiste Lemoyne was talking about, which was signed between Armenia and France?

- It is a very extensive road map, which has great ambitions. It envisages cooperation, for example, in areas such as the latest technologies, high technologies, sustainable energy, sustainable development. It also envisages the active role of the French Development Agency, which is already present in Armenia, as well as it aims to promote the Armenian market in France.

- And what is the progress of the implementation of that agreement, the CEPA?

- As you already know, the Comprehensive and Enhanced Partnership Agreement has already been signed, approved in both Armenia and France, and now it must be implemented. At the moment, the European Union expects the Armenian side to develop various strategies, based on which it will be possible to continue cooperation.

- And in general, which spheres of mutual interest in the Armenian-French relations have the potential for development?

- I think education is an area where we are already doing a lot, but we can further strengthen the cooperation. As you know, we have a French school here, a French University in Armenia, an Armenian-French professional center. In other words, we have a very good basis, which, I think, allows us to further develop these programs of cooperation in the field of education to meet the needs of both the Armenian government and Armenian enterprises. We are thinking of projects that can be implemented by both the French state and local governments or French associations.

- According to the latest data, in 2021 the trade turnover between Armenia and France amounted to about $ 95 million. I wonder if there is task to expand the volume of bilateral trade, given the role of trade and economy in interstate relations.

- Yes, as I said, we already have close cooperation in the field of culture, education, we have a great desire to further develop our relations in the field of economy, which is the reason why we signed the above-mentioned road map in December last year. At the moment, we do not have a specific number, because we must first understand what projects we will work on, and then involve the actors who will be interested in those projects.

- France holds the Presidency of the Council of the European Union for 6 months this year. I wonder what role France, as the EU presidency holder, can play in resolving escalating conflicts in Europe.

- Since taking over the presidency of the Council of the European Union on January 1, 2022, France has taken various initiatives in the region. President Macron and President of the European Council Charles Michel organized a meeting between Armenian Prime Minister Nikol Pashinyan and President of Azerbaijan Ilham Aliyev. France's goal was, first of all, to ensure a dialogue between the two countries, as well as to contribute to the solution of the humanitarian problems that arose after the war. As you know, due to that mediation, 8 Armenian soldiers were released and returned to Armenia by a French military plane.

France is also working to resolve the crisis in Ukraine. As you know, before the start of hostilities, President Macron visisted Moscow and then to Kyiv to try to find a peaceful way out of the crisis. Unfortunately, President Putin did not listen to the French President's call for peace. And, of course, France strongly condemns Russia's military invasion into Ukraine, which is a gross violation of international law and one of the greatest crises of the 21st century in Europe.

- Certainly, as the Co-chair of the Minsk Group, France wants to continue its work and make efforts for the settlement of the Nagorno-Karabakh conflict. Unfortunately, we see that Azerbaijan does not allow the Minsk Group to work, so we are trying to find other ways to ensure dialogue, in particular through the actions of the European Union.

- And how can Azerbaijan be brought to a more constructive field?

- Are there any other events dedicated to the 30th anniversary of diplomatic relations this year?

- Yes of course: This year will be dedicated to the events of the 30th anniversary of diplomatic relations. It is a pity that our very first event, which was organized on February 24 at the embassy, took place in a somewhat sad situation, in the light of the hostilities in Ukraine. But we have also planned other events, such as concerts, film screenings. We have also planned debates of ideas to ponder on what the next 30 years will be like for French-Armenian relations.