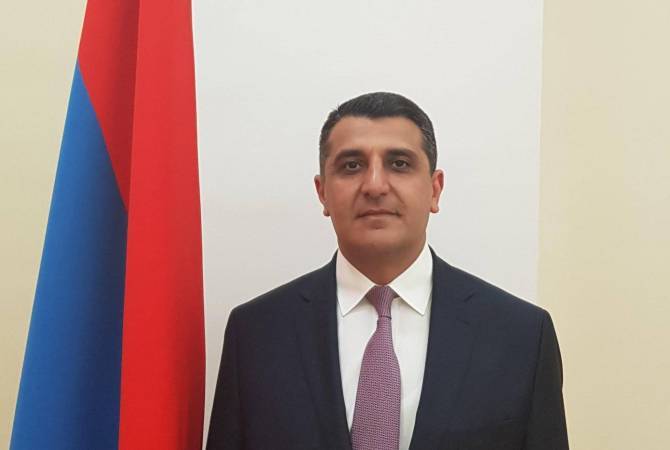 18:16, 18 March, 2022
YEREVAN, MARCH 18, ARMENPRESS. The Ambassador of the Republic of Armenia to the United Kingdom of Great Britain and Northern Ireland Varuzhan Nersesyan gave an interview to the British Times Radio. ARMENPRESS presents the interview below.

Host: Now we're all getting used to seeing the map of the Ukraine, it lies north of the Black Sea, pull the zoom out a bit and look south east and you'll see Armenia and Azerbaijan. These two countries have long been in conflict over the disputed region of Nagorno-Karabakh. Russian troops have kept the peace and thousands are stationed in Armenia but some say that Armenia suffers from Stockholm syndrome about Russia, it has to love the Russian forces that in fact keep it captive. Let's speak to Varuzhan Nersesyan who is the Armenian Ambassador to the UK. Good morning to you.

Ambassador: Good morning and I’d like to welcome all of the listeners to your radio station.

Host: Welcome. I think it's fair to say there will be some people who are aware of what's gone on in Armenia and Azerbaijan, specifically we are talking about Armenia, but some people will not. Can you just explain how the war has effected tensions that may already have existed in Armenia?

Ambassador: Absolutely, thank you very much for your question and of course Armenia is located in a very vulnerable geo-political location in the South Caucasus. Already, before the crisis in Ukraine Armenia and Nagorno-Karabakh suffered immensely, from the aggression, from the war that was perpetrated by a neighbouring country in September 2020.

The current crisis in Ukraine has been used to escalate the situation as we have seen, because the attention of the international community is focused currently on Ukraine. We have seen certain attempts by Azerbaijan to escalate the situation, particularly in Nagorno-Karabakh. The population has been harassed and threatened by the Azerbaijani government. There have been many attempts to create constant provocation at the line of contact and violations of the ceasefire. Not only that but a psychological warfare is being conducted against the people of Nagorno-Karabakh, particularly the Azerbaijani side brings loudspeakers and harasses the local population, threatening them to leave their own villages, their own homeland, and their ancestral land. Threatening to use force unless they abide by these threats and leave their homes. Aside from this, unfortunately, the Azerbaijani has exploded a gas pipe line leading to Nagorno-Karabakh and not allowing specialists to actually enter that area and restore the gas pipeline, and because of this the entire population of Nagorno-Karabakh is deprived of gas and energy supply and are on the brink of a serious humanitarian crisis.

Host: And were the Russian troops invited to help, to keep the peace?

Ambassador: Well, the Russian troops, these are not troops. These are Russian peacekeeping forces that are deployed there in accordance to November 9 and 10 ceasefire statement agreed by Armenia, Azerbaijan and the Russian Federation and the Russian peacekeeping force at the time was able to stop the bloodshed in November 2020 after they entered the area, after the ceasefire. They are currently, yes, in that area and thanks to them the peace is being maintained in that area.

Host: Of course, and I understand you have your own concerns within your country. You've talked about this intimidation, you've spoken about the gas pipeline but you've also spoken about the bloodshed. Now, Russia is currently responsible for a huge amount of bloodshed of children and civilians in Ukraine. Does that make your links with Russia, your reliance on Russian peace keeping troops, as you call them, less palatable, more difficult?

Ambassador: Well of course we are very much concerned about the current crisis in Ukraine as we have centuries’ old relationship with both countries. With the Russian people and the Ukrainian people, we have old bonds of friendship and close relations. Aside from that, of course, we have large Armenian communities in Ukraine, around half a million in Ukraine and 2 million in the Russian Federation. So, already we are receiving hundreds, if not thousands of groups of people who seek refuge in Armenia. Not only Armenians but people of the Russian origin, of the Ukrainian origin, they come to Armenia and are seeking refuge.

Host: Well I was going to say to you that Russia says it was a military operation, the international community says it’s an invasion. What do you think it is?

Ambassador: Well as I said we maintain very close relations between both countries. We are not in a position to bring an evaluation. Our government is completely neutral in this endeavour and situation. As I said our position as soon as possible is to help them, both sides to achieve peace. At this stage the most important thing is not to create evaluations but is to stop the bloodshed. That's the most important task for all sides involved. Be it Armenia, be it the international community be it the Russian Federation or Ukraine. The most important task is to stop the bloodshed and then to address the situation and then to find solutions because this suffering is for everybody. The international community is so much interlinked and intertwined, this suffering cannot only be localised.

Host: Of course, Varuzhan, let me just ask you one final question because I understand you say you have to remain neutral. A lot of people won't understand that but some people will because of your geo-political situation. You say the bloodshed needs to end, there needs to be a solution. What do you think that solution might be?