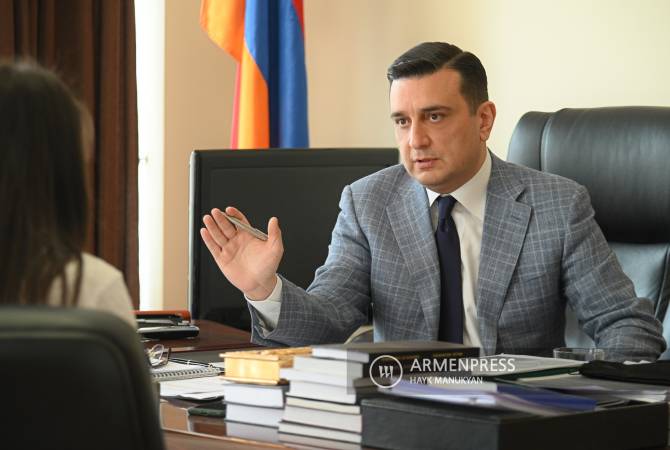 ARMENPRESS spoke to YSMU Rector, Professor Armen Muradyan on the one-century history of the university, reforms and successes and other projects.

ARMENPRESS: Mr. Muradyan, given the high demand for the YSMU among graduates, including from abroad, what is the university’s secret to success?

Armen Muradyan: For many years, a medical university was highly needed in our country, and ever since its creation the YSMU has been firmly standing by our people for already 100 years. A very strong and firm team has always been working in this university at all times. And even today in these difficult times, when seemingly the world order and system of values is changing, the medical university remains committed to its principles and continues its mission aimed at preserving the health of the people. And of course, the integrity and devotion of our team ensures our effectiveness. I think both the goal and the team behind implementing it were able to create the formula of success.

ARMENPRESS: What key projects and work would you point out in terms of improvement of the quality of education from the perspective of both academic staff and infrastructures?

Armen Muradyan: The demand for the university that has developed from the world medical community is a demand formed by constant development. Among the most serious programs are the implementation of the accreditation and internationalization processes. I believe that our major program ought to be the reforms in line with the internationalization process, which would enable to be promoted and become known among other systems, institutions and universities. In this direction we firstly implemented a benchmarking and saw were we stand, what we want and what needs to be changed in order for us to appear where we want to stand. For the beginning it is a realistic goal to be presented in the top 1000 leading global universities,” Muradyan said. He highlighted the recent opening of the COBRAIN Scientific-Educational Center for Fundamental Brain Research at YSMU.

“And also as part of Horizon 2020 program four grant programs were unified around this idea and a platform was created that will enable to present 100 articles with influence score instead of 80 annually. This is a highly important indicator because if a university is presenting 100 or more articles with influence factor in journals then it has overcome the 60% of international accreditation. I am sure that we must head this way,” he added.

ARMENPRESS: We spoke about the demand for the YSMU among foreign graduates. Please present from which countries are students coming to Armenia to study at the YSMU. Once, most foreign applicants were from India, has there been any change in the geography of foreign applicants lately?

Armen Muradyan: Over 50-60 years ago the YSMU began to attract the Diaspora-Armenians in our education programs, which also laid the foundation for attracting foreign students. 35 years ago the first group of foreign students arrived from India, and that small-numbered pilot program now grew into a faculty of 2000 students involving 33 countries. Our colleagues from India, who were our first foreign graduates, are now renowned doctors in both India and other countries. But definitely the geography has expanded. After India, most of the foreign students come from Jordan, Iran, Russia, Georgia and Syria. In the past five years the number of foreign students grew around 15%. Today it would be difficult to imagine the YSMU without foreign students,” Muradyan said, noting that nearly 25% (or every fourth) of all students at the YSMU are now foreigners.

“Nearly 25% of YSMU’s students – every fourth student, and I am happy to say that already every third freshman are foreigners, and we want to achieve every second student to be from abroad, and if we succeed we can say that we have completed the entire internationalization program,” Muradyan said.