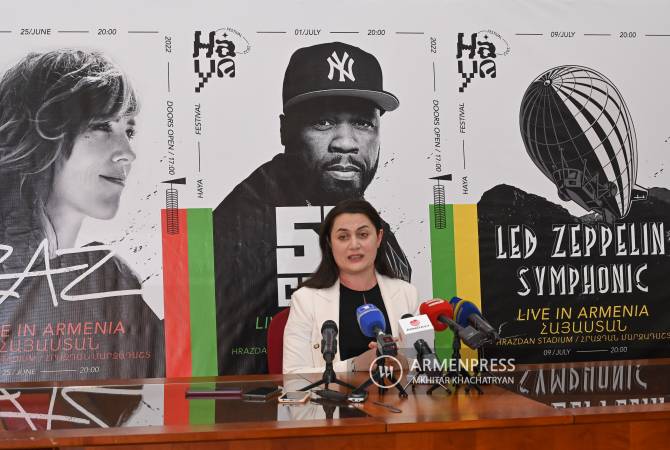 
YEREVAN, MAY 13, ARMENPRESS. Despite being disused for many years, the Hrazdan Stadium in Yerevan is ready to host the highly anticipated concerts of 50 Cent, Zaz and Led Zeppelin Symphonic this summer.

The organizer of the concerts, the Haya Festival, says the stadium is being renovated and prepared for the events.

Haya Festival was founded in 2022 by Sona Hovhannisyan, the Co-Founder and General Manager of Yerevan Perspectives International Music Festival.

Hovhannisyan said at a press conference that the Haya Festival will open a new chapter for Armenia’s cultural, economic and other areas.

“This festival is a new institute, a new mechanism to hugely promote Armenia, to show our country as a peaceful, sustainably developing and blossoming country that has a glorious future where thirty, fourty and fifty thousand people arrive for concerts and listen to artists whom many people dream of seeing,” Hovhannisyan said.

Hovhannisyan said they’ve seriously studied the territory of the Hrazdan Stadium. “Perhaps it requires huge investments for sports events, but we viewed it as a concert venue capable of hosting 54 thousand people. There is no other place like that in our country. We’ll need an area like this again when for example we’ll announce the Jennifer Lopez or Enrique Iglesias concerts. I’m happy that we will give back the stadium to the city in new colors,” she said.

Haya Festival doesn’t rule out the possibility of holding the festival in other cities of Armenia in the future.

Tickets for the concerts are already available both locally and internationally.