Delegation of Artsakh led by Speaker of Parliament visits Lebanon 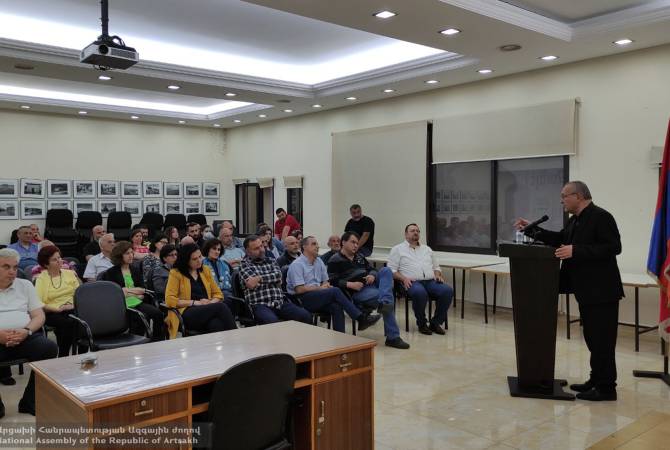 
YEREVAN, MAY 25, ARMENPRESS. The delegation led by Speaker of Parliament of Artsakh Artur Tovmasyan visited Lebanon at the invitation of the Armenian community, the press service of the Artsakh Parliament said.

The Artsakh delegation firstly visited the Armenian Anjar village of Lebanon, where they were welcomed by the mayor and the representatives of the ARF Anjar “Red Mountain” Committee.

The delegation members also visited the gallery of the town, the St. Boghos Church and the Musa Dagh memorial, etc. Then, they met with the Armenian population of the village.

The Speaker of Parliament introduced the Lebanese-Armenians on the pre-war and post-war socio-economic situation of Artsakh, the past and ongoing projects. He touched upon the numerous statements and interviews of the President of Artsakh, the Speaker of Parliament and the parliamentary factions over the issues relating to the status of Artsakh and the Artsakh people’s right to self-determination. In his remarks Artur Tovmasyan highlighted the role of the Russian peacekeeping contingent as a reliable guarantor of the security of the people of Artsakh.

Artur Tovmasyan was impressed by the daily life, traditions and hospitality of the people of Anjar. He said that the most organized Armenian community is in Anjar.

The residents of Anjar said that they are concerned about the future of Artsakh. Anjar resident Gevorg Hajiyan was fallen at the 3rd Artsakh war.