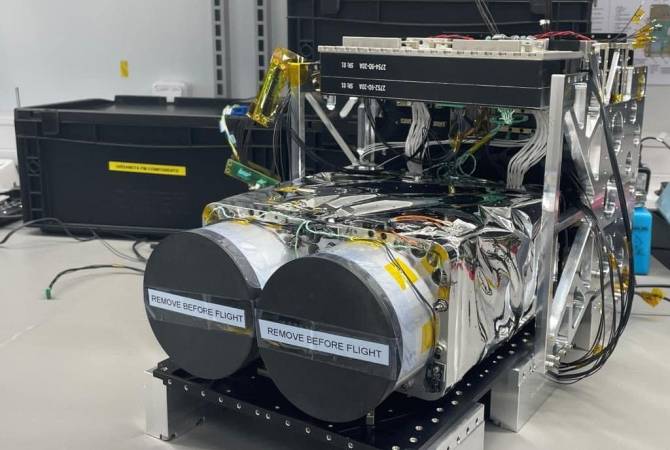 
YEREVAN, MAY 27, ARMENPRESS. The National Academy of Sciences of Armenia (NAS) issued a statement over the launch of the first Armenian satellite into orbit.

It said that it highly values this important step in the direction of applying leading space technologies in Armenia.

The first Armenian satellite was launched into orbit on the SpaceX Falcon 9 Transporter-5 mission.

The Armenian governmental Geocosmos is participating in the data receiving and use works together with SATLANTIS.

The NAS praised the move which will enable to use leading knowledge, train qualified experts and lay the foundation for new developments and technologies.

“In this context the implementation of scientific research in several areas is especially important – data processing, geolocation, image recognition and others. By involving the scientists of NAS and universities in these works, significant fundamental and applied development programs can be assigned. In the past, Armenian scientists have had great contribution in space exploration: Viktor Hambardzumyan, Artem and Abraham Alikhanyans, who conducted research in astrophysics and cosmic rays physics, Grigor Gurzadyan, who participated in the creation of the Orion-1 and Orion-2 astrophysical observatories and were engaged in planetary nebula studies.  A number of important researches are being conducted in our scientific-research institutes today as well, for example the processing of data received from satellites, the issue of monitoring and neutralizing space debris etc.

It is necessary to restore our past capacity with consistent steps, directing it for the solution of the country’s vital issues. We are sure that the creation of the satellite control center and receiving station in Armenia will contribute to our security, management of emergency situation, protection of the environment, monitoring of climate change and the effective implementation of other important work.

We hope that the positive trends adopted by the Armenian government in science will be continuous and will enable the scientific community to record new achievements,” NAS said in the statement.

The first ever Armenian satellite was launched into the Earth’s orbit, Armenian Prime Minister Nikol Pashinyan announced at the Cabinet meeting on May 26.

“On May 25, 2022, at 22:35 Yerevan time, Armenia’s first space satellite was launched into the Earth’s orbit on a SpaceX rocket from Cape Canaveral in the United States,” Pashinyan said.

Armenia will have a satellite control center and downlink facility by 2023, the PM added.

Moreover, the images made by the Armenian satellite will be used for various purposes, such as border surveillance. “The images made by the satellite will be used in Armenia for border control, prevention and management of emergency situations, preservation of the environment, including monitoring of climate change, urban development, road construction, geology and other areas,” Pashinyan said.