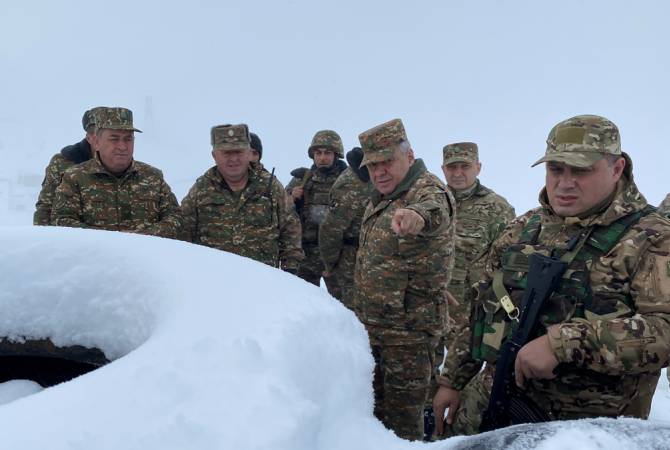 
YEREVAN, DECEMBER 18, ARMENPRESS. Defense Minister of Armenia Vagharshak Harutyunyan visited the south-eastern border on December 18. Harutyunyan followed the process of military duty in the new positions, talked to the commanders and servicemen.

As ARMENPRESS was informed from the press service of the Defense Ministry of Armenia, Minister Harutyunyan also visited the positions where the distance between Armenian and Azerbaijani border guards is just 100 meters.

The Defense Minister particularly focused on the social conditions in the positions being just constructed and equipped. The commander of the southern military Corps reported to the Minister that the works for equipping the new positions have already started, particularly, aimed at the full implementation of the combat duty during bad weather conditions.

During the meeting with the military personnel Defense Minister Harutyunyan thanked the servicemen who had participated in the war, awarded some of them. The Minister emphasized that the Defense Ministry will take all possible efforts for making the front line maximally safe for service and for creating all necessary social conditions.