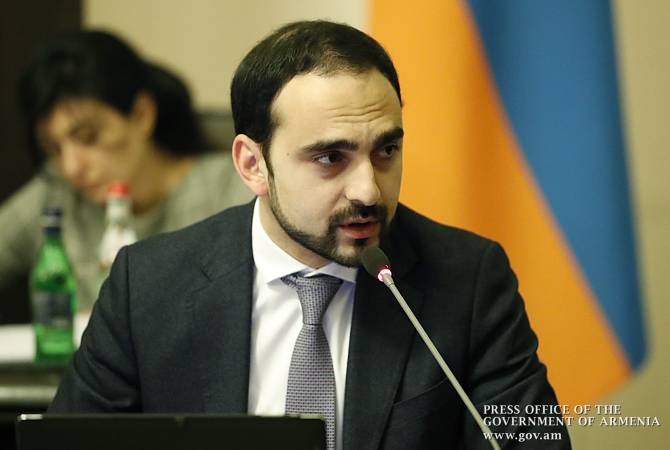 
YEREVAN, JUNE 2, ARMENPRESS. Caretaker Deputy Prime Minister of Armenia Tigran Avinyan has released an article entitled “Artificial Intelligence Strategy for Armenia”, touching upon the importance of the artificial intelligence in the 21st century, its prospects in Armenia and the necessity of developing a respective strategy.

The potential of artificial intelligence in the 21st century

Artificial intelligence (AI) is one of the 21st century’s most powerful technologies, a key driving force behind the Fourth Industrial Revolution.

According to one definition, artificial intelligence “is a computer system that is able to perform tasks that ordinarily require human intelligence”. AI is transforming the political and economic structures worldwide; it will soon drastically change our way of life.

This technology has permeated almost every field of human activity, from healthcare to the military. For instance, 90% accuracy in diagnosing breast cancer was recorded with the use of AI technology. The armies of developed nations are very close to creating autonomous “killer robots.”

AI is of strategic importance today and it tends to become a key driver for economic development, as it can help dramatically increase labor productivity and efficiency. PwC forecasts that the use of AI will lead to $ 15.7 trillion increase in global GDP by 2030.

Millions of jobs that do not require sophisticated skills and creative approaches will be redundant due to redistribution of machine-human roles, and on the other hand, millions of new ones will be created in the near future. According to World Economic Forum estimates, 75 million AI-operated jobs will be closed down by the end of 2022, and 133 million will be generated instead.

Given AI’s strategic strength, developed and even developing nations have embarked on a race for dominance in the sector, seeking to provide their citizens, industry and institutions with the skills, knowledge and tools necessary for the AI era through large-scale investments and targeted policies.

There is a general consensus in scientific and expert communities that those countries doing their best to develop AI technologies through prospective investment will be at the forefront of the emerging world order.

While the United States is still the global leader in the field of artificial intelligence, China intends to become a center of fundamental and applied research and AI technologies by 2030. At the same time, relatively small nations, such as South Korea, Singapore, Ireland, Finland and Israel, boast significant progress in this field. As of 2018, Israel was not far behind the second-placed China as regards the number of AI startups (362 against 383), while Ireland is the European leader in terms of per capita AI specialists.

In the long run, Armenia can join the family of leading AI nations. For that, however, our country needs to promote the development of the sector.

With its broad implications and many uses, artificial intelligence can become both an instrument of economic development and technological progress for Armenia and an opportunity to get a decisive edge in the military sphere.

In fact, basic research does not require too much investment. Mostly stable internet connection is needed, and in some cases supercomputers (for example, for more complex neural network training). In addition, we have a remarkable legacy, well-established traditions and comparative advantage over the countries of Eastern Europe in the field of mathematics and natural sciences.

Regretfully, Armenia’s STEM science base is not yet widely used for developing artificial intelligence. AI education is still in its infancy in Armenia in spite of the fact that Bachelor’s and / or Master’s degree and non-formal academic programs in artificial intelligence have been launched in a number of universities in recent years.

In addition, there are no doctoral or postdoctoral programs in Armenia, which leads to a “brain drain” or scientific stunting of young people who want to develop their professional skills, due to which the field is developing slowly.

Armenia should also pay great attention to the development of AI engineering, which is the application of algorithms derived from basic research to solve various problems of human activity. We need real-world data to apply the algorithm and to adapt it to a particular problem. The government will have to intervene by collecting, digitizing data and developing easily accessible databases.

The national AI development strategy and the resulting action plan should be considered a framework for coordinating and directing the stakeholders’ activities in order to pursue a common policy in this field. Following the publication by Canada of its national AI development strategy in March 2017, more than 30 countries developed similar documents to promote scientific and applied research in the field.

Having such a strategy should be a top priority for Armenia today. At the same time, by saying strategy, we should not imply a template document, but rather a consensus vision for AI development and other specific measures to achieve it through close synergy between the government, the private sector and individual researchers.

The strategy and the action plan may suggest:

- introducing doctoral and post-doctoral programs, expanding the role of artificial intelligence in universities and the centers providing education in the field of ICT;

- using the Diaspora’s huge human and social capital in order to set up research labs in cooperation with leading international institutions;

- establishing a special venture fund based on the model of public-private partnership, which should invest in promising AI startups;

- ensuring collection, digitization and broad availability of data generated in the country, implementing a coordinated and unified policy by various government agencies, building the necessary infrastructure and so on.

I believe that through effective state-private-academia cooperation and targeted efforts, Armenia will be able to join the family of leading countries in the field of artificial intelligence, which in turn will pave the way for a technological breakthrough in the 21st century to achieve the status of a developing country.