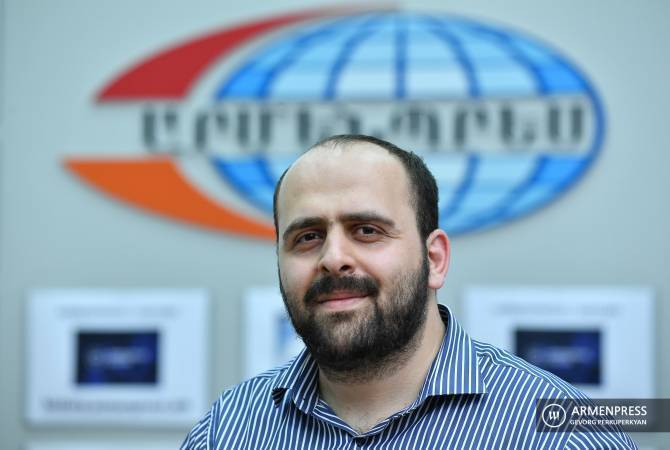 
YEREVAN, 30 SEPTEMBER, ARMENPRESS: The aspirations of the people of Artsakh were and are still challenged by Azerbaijan. The military solution was chosen as an option to solve the conflict both in the brief period of existence of two small Caucasian republics and after the fall of the Soviet Union. After the fall of the Soviet Union the parties again resorted to the military solution which was ended by the 1994      armistice agreement signed in Bishkek by the representatives of Artsakh, Armenia and Azerbaijan. Artsakh and seven other districts      that surround it fell under the effective control of Armenian forces. On 27 September, 2020 Azerbaijan unleashed a war in an attempt to have full control over the territory of Artsakh. The outcome was that a      significant part of Artsakh as well as all the surrounding territories fell under the Azerbaijani control.

The legal aspects of the Artsakh conflict were silenced by emotional discussions and irredentist hue and cry. In the present article I will try to shed light on the conflict from the legal perspective which is indeed a novel approach to narrating the story of the conflict. In particular, I will discuss whether and to what extent it is possible to use the international legal mechanisms and institutions for the solution and transformation of conflict.

The four resolutions of the UN Security Council and the obligations of Armenia: is Armenia an aggressor?

The UN Security Council adopted four resolutions (822; 853; 874 and 884) that refer to the Nagorno-Karabakh conflict. The resolution N822 was adopted immediately after Kelbajar district became under effective control of Armenian forces during the First Karabakh War.  The UN SC notes with alarm ‘’the escalation in armed hostilities and, in particular, the latest invasion of the Kelbajar (the Armenian endonym is Qarvajar) district of the Republic of Azerbaijan by the local Armenian forces’’ (United Nations, 1993). In this resolution, the Republic of Armenia was never mentioned as an occupying power by the UN SC and the subject that was referred were the local Armenian forces. Furthermore, in resolution N884, which was adopted after the Zangelan (the Armenian endonym is Kovsakan) district and the city of Horadiz fell under the effective control of the local Armenian forces, the UN SC  called upon the Government of Armenia ‘’to use its influence to achieve compliance by the Armenians of the Nagorny Karabakh region of the Azerbaijani Republic with resolutions 822 (1993), 853 (1993) and 874 (1993), and to ensure that the forces involved are not provided with the means to extend their military campaign further’’ (United Nations, 1993). This is the only specific mention of the Republic of Armenia indicated in the four UN resolutions. It should also be mentioned that the wording of the UN SC could have been stricter and it does not always use such restrained wording. For instance, in resolution N216 which was adopted regarding the situation in Southern Rhodesia the UN SC labels the local authorities as ‘’illegal racist minority regime’’ (United Nations, 1965). On the other hand, no strong wording was used by the UN SC with regard to the local Armenian forces of Artsakh.

Now another question may arise: are the aforementioned four resolutions binding and, if yes, to what extent? According to the ICJ it might be determined based on the wording used in the resolutions. Normally, if strong words such as ‘’demands’’, ‘’decides’’, ‘’under Chapter VII’’ signal that the UN SC intends its resolution to be binding. One might claim that the binding decision is supplemented with the power of use of force when the UN SC uses ‘’by all necessary means’’ wording (Henriksen, 2019, 264). However, in non-binding resolutions the Council frequently uses less strict wording such as ‘’recommends’’, ‘’calls for’’ or ‘’appeals’’ (Henriksen, 2019, 264). As for the resolutions concerning the Nagorno-Karabakh conflict both strong and relatively softening vocabulary is used, however the close observation proves that the strong wording clearly does not outweigh. It is worth noting that in resolution N884 it called upon the Republic of Armenia and did not demand anything from it.

Currently, against the background of the heightened tension in the region there are more and more voices exhorting the government to bring the issue before the Security Council. However, the necessity of consensus among the permanent five members (China, France, Russia, The United Kingdom and The United States) as well as the agreement of at least 8 members (out of 15) might make it impractical. Therefore, the efforts to raise the issue before the Security Council shall be paralleled with the quest of other appropriate institutional dimensions and legal mechanisms.

In quest of appropriate legal mechanisms

First of all, let us discuss all the international courts where the case might theoretically be heard. It is both logical and natural to start with the ICJ. All the UN members are ipso facto members of the ICJ and the statute of the latter is annexed to the UN Charter (UN Charter, Article 92 and Article 93). The ICJ (aka the World Court) has jurisdiction to hear the case in the following cases:

However, neither Armenia nor Azerbaijan did not make the aforementioned declaration under the Statute of the ICJ. Hence, the ICJ may have a jurisdiction over any legal dispute between Armenia and Azerbaijan only when both parties agree to submit the matter to the Court. Under such circumstance to enter the World Court Armenia has no choice but to find to a convention or equivalent legal instrument also ratified by Azerbaijan which envisages bringing the issue before the ICJ in case of the possible dispute. Recently, Armenia lodged such application against Azerbaijan arguing that the latter violated its obligations under International Convention on the Elimination of All Forms of Racial Discrimination (CERD) (ICJ, 2021).

Another international legal forum is the Permanent Court of Arbitration (PCA), which shares the same premises with the ICJ in the Hague. In short, neither Armenia nor Azerbaijan signed the PCA founding documents (the Conventions on Pacific Settlement of International Disputes). It is interesting to note that in the China v. Philippines case, which involved a territorial dispute in South China Sea, the PCA ruled in favor of the Philippines, however China refused to comply with the decision of the Arbitration (PCA, 2016). Moreover, the Vice Foreign Minister of China stated that China does not recognize and implement the award as the decision of the Arbitration is ‘’just a piece of waste paper’’ (Ministry of Foreign Affairs of the People’s Republic of China, 2016).

The OSCE enables its member states to solve their issues peacefully through the arbitration court. However, unlike Armenia, Azerbaijan did not sign the Stockholm Convention on Conciliation and Arbitration within the OSCE (OSCE, 2020). In addition, it is interesting to note that since 1994 when the Convention entered into force the Court, the annual budget of which is 95000 Swiss Frank did not here any single case (OSCE, 2021)!

Besides the Arbitration Court the OSCE also possesses a number of political mechanisms aimed to prevent the conflict or to curtail the threat posed to the regional security. It has established a number of tools to monitor the implementation of commitments that participating states have undertaken within the human dimension (OSCE, 2011, 10). One of those mechanisms - the so-called “Berlin Mechanism” was adopted in June 1991 at the Berlin Meeting of the CSCE Council of Ministers. The Mechanism outlines measures that can be applied in the case of serious emergency situations that may arise from a violation of one of the Principles of the Helsinki Final Act or as the result of major disruptions endangering peace, security or stability. It foresees that, if any participating State concludes that such an emergency situation is developing, it may seek clarification from the State or the States involved (OSCE, 2011, 22). It should be noted that unlike Armenia, Azerbaijan has once availed itself of the opportunities enshrined in the Berlin Mechanism. On 6 April 1993, Azerbaijan requested an emergency meeting of the Committee of Senior Officials in regard to the situation in Nagorno Karabakh. Two weeks later, the Armenian Delegation presented clarifications under point 1 of the Mechanism, which was met with a renewed request for holding an Emergency Meeting formulated by Azerbaijan (OSCE, 2011, 25). However, the OSCE mechanisms, although      being invoked by numerous states in different situations, are      political rather than legal, thus they are in no way      legally binding. Nevertheless, considering the big resonance of the OSCE mechanisms, Armenia may consider availing itself of the privileges of invoking them in case to deter the further escalation in the region.

The Hague, which is considered to be a town of international courts, is also the  home for the International Criminal Court (ICC) which is in charge of hearing the cases involving crimes of aggression, crimes against humanity, crimes of genocide and war crimes. In short, Azerbaijan did not sign the Rome Statute of ICC and Armenia signed it, but did not ratify. Therefore, under Article 13 of the Rome Statute of ICC, the Court will have power to investigate the alleged criminal crimes only when it is referred to by the     UN SC (ICC, 1998).

The only Court before which Armenia and Azerbaijan may bring cases against each other is the European Court of Human Rights (ECtHR). However, the power of the ECtHR is limited to the scope of the European Convention of Human Rights (Ratione materiae principle). In principle, it may render decisions only regarding cases that involve human rights violations in accordance with the Convention and is not competent to solve territorial disputes, for example.

The analysis shows how difficult it is to legally substantiate and justify that Armenia was or is an occupying power and it has committed its only obligation under the four resolutions of the UN Security Council. However, taking into account all the possible hurdles associated with bringing a case before the Security Council, Armenia shall also seek alternative institutional dimensions and legal remedies. ICJ can be among those alternatives     , though only in limited cases when it is envisaged in the legal instrument. ICC and PCA along with the OSCE Court of Conciliation and Arbitration can hardly be an option. ECtHR can probably be the most competent court, where Armenia may sue Azerbaijan without the consent of the latter, however, its power is limited to the scope of the European Convention of Human Rights. Armenia may also consider availing itself of the remedies enshrined in the mechanisms and procedures of the OSCE.

11:29, 05.19.2022
2929 views U.S. recognizes role of population of Nagorno-Karabakh in deciding its future–Ambassador Tracy’s interview to ARMENPRESS