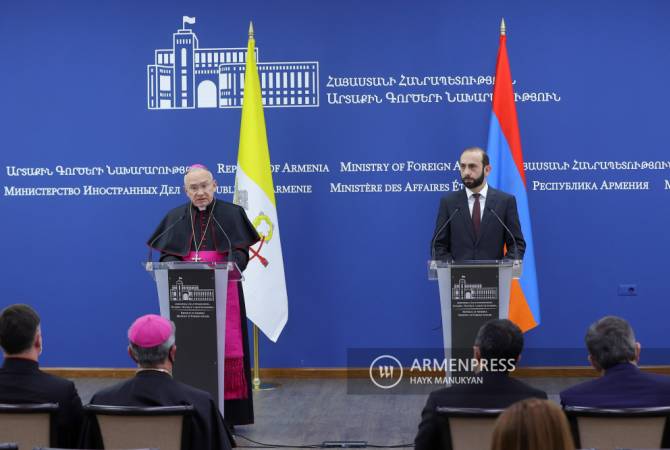 
YEREVAN, OCTOBER 27, ARMENPRESS. The opening of the Vatican’s Apostolic Nunciature in Armenia will become a symbol of building bridges in the region and opening new paths for fair and lasting peace for Armenia and the international community in general, Substitute for General Affairs of the Secretariat of State at the Holy See Archbishop Edgar Peña Parra said in Yerevan during the joint press conference with Armenian Foreign Minister Ararat Mirzoyan.

Edgar Peña Parra said his official visit to Armenia and the meeting held with the Armenian FM reaffirms the cooperative and friendly relations that have always existed between Armenia and the Holy See.

“I brought the greetings of Pope Francis, who has bright memories from his visit to Armenia in 2016 and the recent meeting with President Sarkissian and the Catholicos of All Armenians Garegin II”, he said.

Edgar Peña Parra said the purpose of his visit is the opening of the Apostolic Nunciature of the Holy See in Armenia. On this occasion he expressed his deep gratitude to the Armenian President and the government, which urged the Holy See to open a diplomatic representation in Armenia at the mediation of Ambassador Karen Nazaryan.

“Despite the lack of resources and staff, the program turned into a reality within several months, because we all believed in that. I am convinced that this Apostolic Nunciature will be a symbol of building bridges in the region, creating opportunities for contact and opening new paths for fair and lasting peace for Armenia and the international community in general”, he said.

He said that the physical presence of the Apostolic Nunciature will definitely be useful in solving the potential problems and finding sufficient solutions with proper legal means.

“Today’s event also shows the respect that Peter’s successor and the Catholic Church have for this noble land where some of the ancient nation, that was the first to adopt the Christian faith, lives”, he said.

Archbishop Edgar Peña Parra also talked about the friendly relations between the Holy See and the Mother See of Holy Etchmiadzin, stating that the two churches are committed to continue the work for common welfare.

Summing up his remarks, Edgar Peña Parra reaffirmed the Holy See’s support to the issues on the agenda of the Armenian government and the international community, aimed at peace and disarmament, human rights, human and cultural development, protection of religious freedoms and environment.

“I pray to the God with the hope that the whole Armenian nation would enjoy a lasting peace and real social progress, continuing the Christian traditions inherited from your ancestors for centuries”, he said.

Substitute for General Affairs of the Secretariat of State at the Holy See Archbishop Edgar Peña Parra arrived in Armenia on a two-day official visit.