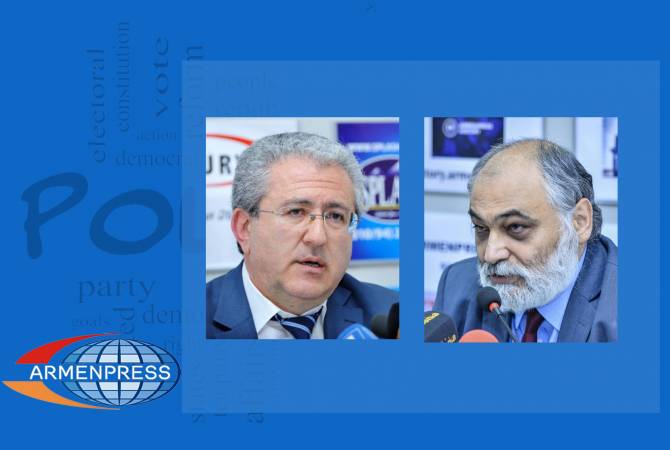 
YEREVAN, DECEMBER 10, ARMENPRESS. Armenian political analysts don’t seem to agree whether or not Yerevan needs the so-called 3+3 format, the inaugural meeting of which was held last week, albeit without Georgia.

The idea of the 3+3 platform for “regional cooperation” was brought forward by Turkey and Azerbaijan after the 2020 Nagorno Karabakh war and was supposed to include Armenia, Russia, Azerbaijan, Georgia, Turkey and Iran, however Georgia repeatedly refused to participate.

Ruben Safrastyan, an academician at the National Academy of Sciences of Armenia and expert on Turkey, argues that Armenia won’t get any benefits at all from the 3+3. But on the other hand, he believes that this platform won’t do much harm if there won’t be any attempts to move Armenia’s strategic issues (mainly the NK conflict settlement issue) from the OSCE Minsk Group Co-Chairmanship format into this arena.

“I’m not even sure that this 3+3 platform will eventually come into life, because if Georgia has opted out this leaves only Armenia and Azerbaijan from the regional countries, so basically this format will become a platform where a mediation should take place over the transport and economic connection unblocking between Armenia and Azerbaijan. But we know that the format of trilateral talks is more preferable for us, where only Russia is the mediator. But here, Turkey joins in. Certainly, to some extent Iran also, who will be more passive. I don’t think this will be a platform for solving any real issues. But if we were to assess generally, certainly this is more unfavorable for us, because if in the trilateral talks only Russia is the mediator, here Turkey steps in, and Turkey is our enemy and the big brother of Azerbaijan. Therefore, there won’t be anything positive about this, on the contrary – the pressure on Armenia will grow,” Safrastyan warned.

Not everyone agrees with Safrastyan, however.

Professor Garik Keryan, the Head of the Department of Political Institutions and Processes at the Yerevan State University, told ARMENPRESS that Armenia ought to participate in this platform.

He says that during the 30 years of regaining its independence Armenia was “left out” of all regional cooperation platforms due to the Nagorno Karabakh conflict, with the exception of BSEC – which, however, in his words is a “half-dead organization”. Therefore, Keryan argues, Armenia ought to participate in the 3+3 to come out of the “regional isolation” and not be seen as a “hindering factor” for regional integration.

“If we consider that this platform also includes Turkey and Azerbaijan, who are hostile countries for us, and we don’t join and thus punish them by doing so, it would be childish naiveness, because we must be wherever they are. This is an additional platform to meet, talk and discuss something. As an expert, my concept for Armenia’s foreign policy is that Armenia must find rules for co-existence with all neighbors in the region, if it wants to survive here and not fly to the moon. If it does want to fly to the moon, then all-right, no problem. But if it wants to survive here in this region, then we must find rules of co-existence with Turkey, Azerbaijan, Iran, Georgia, Russia,” Keryan said.

On the other hand, Safrastyan even argues that by bringing forward the idea of the 3+3 Turkey and Azerbaijan are attempting to cement the new status quo of the region.

Safrastyan reminded that this is not the first case, mentioning Turkish President Recep Tayyip Erdogan’s proposal for a “Caucasian Platform of Stability and Cooperation” which he’d voiced in Moscow after the 2008 Russian-Georgian war. According to Safrastyan, Turkey made the proposal because it panicked when it saw that Russia can use its military in the region. That’s why Erdogan, according to Safrastyan, tried to divide the regional geopolitical influence zones into two – Turkish and Russian.

Back then, Moscow didn’t take it seriously, because it felt so powerful that it didn’t have any desire of dividing influences with Turkey. But today the situation has changed, says Safrastyan.

“We see that Russia is giving Turkey opportunities to gradually step into the region, strengthen its influence step by step. For example, the first step was the creation of the Russian-Turkish Center of Monitoring in Aghdam. Why should Turkey participate in this monitoring center, what does it have to do with it? Russia is the mediator here, the ceasefire was established with Russia’s initiative. And then suddenly a Russian-Turkish Monitoring Center appears. That was already a sign that Russia, to some extent, is giving Turkey the opportunity to acquire influence here. I can conclude that now, after the second Artsakh war, Russia is no longer able to have a monopoly as a problem-solver in the region and is forced to share its influence to a certain extent with Turkey, and the 3+3 is the result of this,” he said.

Ruben Safrastyan also mentioned that another reason for Russia’s agreement to join the platform is its desire to keep the West out of the regional matters. But Turkey, argues Safrastyan, is actually playing both sides of the fence with Russia and the West.

“This is a double-game for Turkey, and even in these two games it still doesn’t have almost anything to lose,” he said.

In terms of Iran, Safrastyan says its participation in the 3+3 is important because it gets the opportunity to enter a process without the West and to establish its reputation.

“I don’t think Iran has the opportunity or desire to engage in active policy in our region, but this format is an opportunity for it to reaffirm its role geopolitically,” he said.