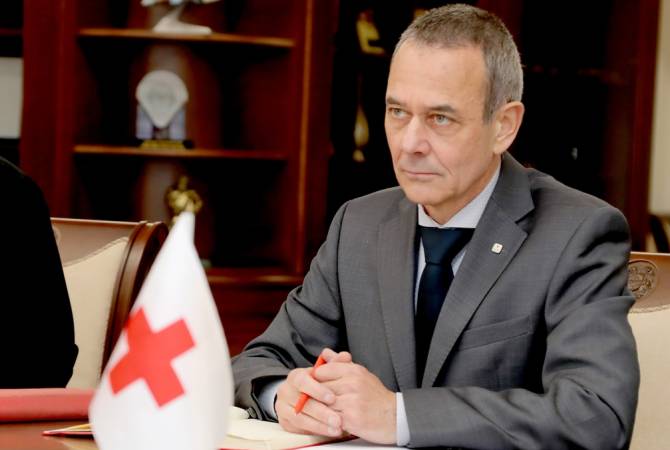 
YEREVAN, 21 MARCH, ARMENPRESS. Minister of Defense of Armenia Suren Papikyan on March 21 received the delegation led by the head of the Delegation of the International Committee of the Red Cross in Armenia Thierry Ribaux.

As ARMENPRESS was informed from the Ministry of Defense, Suren Papikyan thanked Thierry Ribaux for the efforts made for the protection of the rights of Armenians held in Azerbaijan, mentioning that Geneva Conventions guarantee the protection of the rights of the prisoners of war, right of respect of their honor and dignity, which should exclude any kind of humiliating attitude.

At the same time, Suren Papikyan informed the head of the Yerevan Office of the ICRC the concern of the Ministry of Defense of Armenia concerning the attempts of the Azerbaijani authorities making the issue of return of prisoners of war and civilians exclusively a matter of political speculation.

During the meeting the interlocutors discussed also the issues related to finding out the fate of the missing persons, Armenian captives, problems of coordinating the works between the interdepartmental commission and the ICRC related to missing persons and other issues.

Thierry Ribaux assured that the delegation of the ICRC takes all necessary steps of clarifying the fate of missing persons, as well as at the direction of clarification of information about prisoners of war and civilian captives.