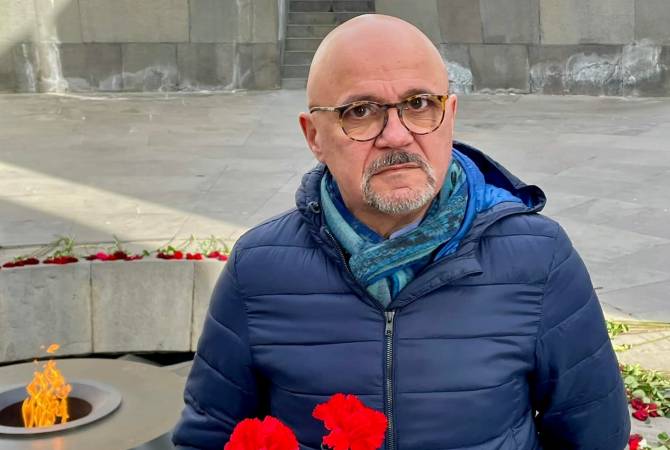 He emphasized that the Diaspora-Armenians should seek alliances with human right defenders, researchers, historians and politicians to push the process of recognition and condemnation.

“It is shameful for the Turkish state apparatus to deny the blatant genocide of the Armenian people in 1915. Conversation and diplomacy are important, but we must find better strategies since the recognition of the genocide is about human rights. It is important to seek alliances with other ethnic groups, human rights defenders, parties that respect human rights, historians, researchers both in countries and internationally to exert pressure. Human rights must take precedence over trade relations with Turkey. The European Union has to put pressure on Turkey to stop denying the genocide”, he said.

Murad Artin said that with the government that rules Turkey today, it will be difficult to meet with facts. “But there are many democratic forces and ordinary people in Turkey who want to come to terms with their history and want to look for truths. As democrats, we must work with these forces and give them all their support to come to power and change their policy of denial”, he added.

“Recognition of genocide is a part of human rights that is also universal and should never be negotiated away. We who care about human rights should never compromise on that matter, we must continue to fight for the recognition of the Armenian genocide. The struggle for democratic freedom and rights is important for many countries, organizations, politicians and ordinary people, therefore we must always invoke them no matter what geopolitical situation we are in”, he noted.

Touching upon the current dialogue between Armenia and Turkey, the former Swedish MP said “normalization of relations between countries should never prevent talking about human rights, it should never prevent dealing with history and the past - otherwise one can never move forward”.

“I have absolutely no objection to the countries as Armenia and Turkey having good relations, but one should not negotiate away the genocide, one cannot close one's eyes to the crime against humanity that the young Turks have committed against the Armenians and other Christian groups. It is good that the countries can now approach, but that it is important that the issue of the genocide of 1915 is included in those discussions. Otherwise, this unresolved conflict will be like a boil over the peoples. Recognition of the genocide would facilitate negotiations and free the Turkish people from Erdogan's history denial”, Murad Artin said.

“The International Court of Justice in The Hague must be able to operate freely and without endorsements from superpowers. Criminals must be investigated, prosecuted and punished, regardless of the country. But it is not enough with sanctions and punishments of those who commit crimes against humanity, instead of talking about globalization which means that companies unite across borders, we must start talking about internationalization which means that - in addition to companies - also unions and social movements close together”, he said.