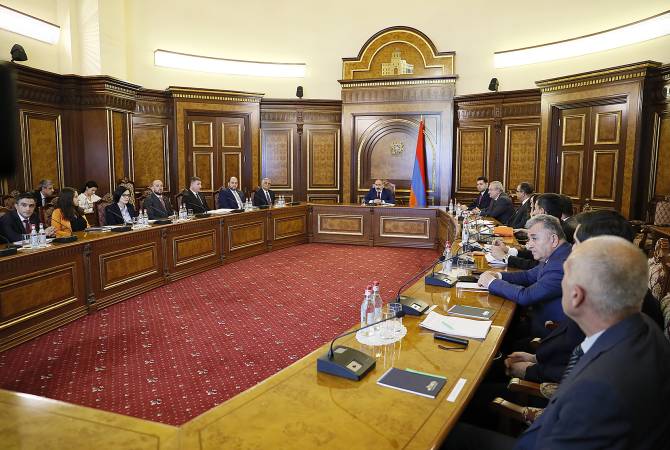 
YEREVAN, APRIL 25, ARMENPRESS. Prime Minister Nikol Pashinyan chaired a consultation at the Government, during which the state program for the development of education in Armenia until 2030 was discussed, which was amended based on the results of the previous consultation, as well as the main provisions of the draft law on “Higher Education and Science”, ARMENPRESS was infomred from the Office of the Prime Minister.

In particular, reference was made to the changes made in the above-mentioned state program as a result of amendments, the vision and goals of the program. The officials stressed that the main goal of the program is to provide a competitive education that meets international standards.

It was noted that the program was developed in cooperation with international partners.

In the context of presenting the main provisions of the draft law on "Higher Education and Science", the provision of quality education by the universities, their compliance with the clear standards to be still defined, and the consistent solution of the existing problems in the university system were emphasized.

A number of issues related to the licensing and accreditation processes of the universities, the future activity of the departmental universities, the training of qualified personnel meeting the professional requirements of the labor market, the development of a new complete list of professions were touched upon. Various suggestions and observations were presented, around which an exchange of views took place.

Prime Minister Pashinyan specially emphasized the implementation of consistent work aimed at improving the quality of education, noting that a person should be able to satisfy the needs based on the education he received. “A person should be endowed with knowledge and skills from childhood, so that he can build a dignified life in his own country. We must rule out a situation in which any student with progress is dismissed from the university due to financial problems," said the Prime Minister, considering it necessary to have a clear plan of development measures for universities, which will solve the existing problems in a targeted way and will foster the development of the higer education system. At the same time, the head of the government attached importance to the existence of a research component in the universities, the link between science and higher education. "The future of our country depends on the development of education, it is of strategic importance for us," said the Prime Minister, considering it necessary to continue the discussions on the state program for the development of education until 2030 and draft law on "Higher Education and Science" for finalising them.