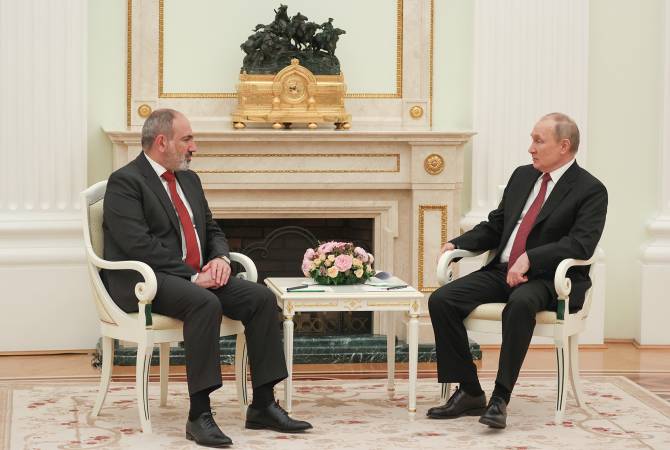 
YEREVAN, MAY 16, ARMENPRESS. Prime Minister Nikol Pashinyan held a private conversation with President of the Russian Federation Vladimir Putin in the Kremlin, ARMENPRESS was informed from the Office of the Prime Minister.

The Russian President said, “Honorable Nikol Vladimirovich, we are in constant touch, discussing issues of bilateral agenda and regional issues. However, there are always numerous questions, which obviously indicates the intensity of our dialogue. At the beginning of our bilateral talks, I would like to note that over the past year we have seen a significant increase in trade turnover, investments continue, and we continue to work actively on the settlement of the Karabakh conflict in the trilateral format, together with our Azerbaijani partners. There are many issues, I am glad to have the opportunity to meet you and talk about all topics."

Of course, less than a month has passed since my first official visit to the Russian Federation. We had a very meaningful conversation then, and as you rightly noted, our bilateral agenda is so abundant that we could meet more often. We are in constant touch, we often have telephone conversations. In terms of the economy, I would like to note that after a certain decline in March, intensification of bilateral economic ties is noticeable. We see investment interest from Russian business, wishing to invest in Armenia. And I know that in this issue you are also encouraging Russian businessmen to invest in Armenia. I want to thank you for that.

Of course, I hope that today we will discuss issues related to regional security, stability, the settlement of the Nagorno-Karabakh conflict, as well as the important role of the OSCE Minsk Group, as we mentioned in our joint statement. I would like to share some information with you, so thank you for the meeting."