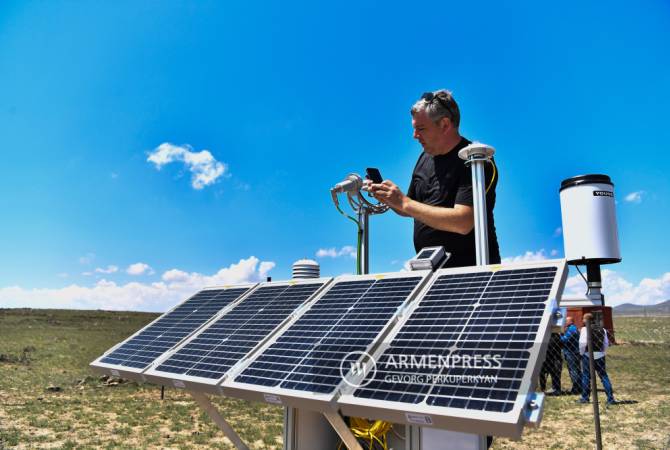 The EIA work is carried out in line with the highest international standards adopted by Masdar with the involvement of local and foreign experts.

‘We attach great importance to cooperation with Masdar, because the company has big experience in renewable energy, as well as green technologies,” Tadevosyan added.

“This is just the beginning, because Masdar has already expressed interest to build a similar-capacity solar power plant in Armenia, and we already have a preliminary agreement,” Tadevosyan added.

Aside from the EIA works, archaeologists are working in the area to map and classify all archeological sites nearby in order to safeguard the historical-cultural legacy from any harm.

Boris Gasparyan, a scientist at the Institute of Archeology and Ethnography working on site, said they have discovered ancient tombs, relics dating back to the 18th or 19th centuries, as well as settlements dating back to 400,000 years.

In November 2021, a Government Support Agreement was Signed between the Republic of Armenia and Masdar Company United Arab Emirates on the construction of a 200-megawatt (MW) solar photovoltaic (PV) plant.

Masdar company, which was recognized as the winner of the tender for the implementation of the program in July, introduced $ 0.0290 per kilowatt-hour (kWh) tariff. The total project investment cost will be $ 174 million, and the solar station to be built within the framework of the project will be the largest in Armenia.