As we brought democracy to Armenia, so let’s bring peace: PM calls for unity 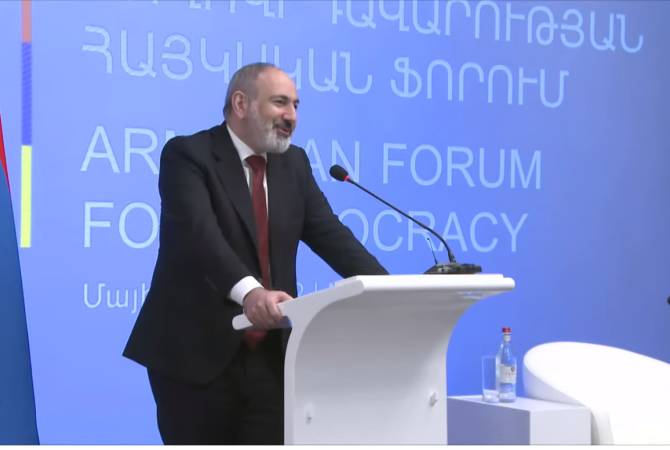 
YEREVAN, MAY 20, ARMENPRESS. Democracy today is the most important factor to guarantee and preserve the sovereignty and independence of Armenia, Prime Minister Nikol Pashinyan said in his remarks at the Armenian Forum For Democracy.

“I think that there are two very important questions which we need to answer. The first one is to what extent democracy is capable to protect and preserve the country’s security and to what extent democracy is capable to protect and preserve the country’s sovereignty and independence. I think that I already gave the answer to the second question and this question that today democracy is the most important and key factor for guaranteeing and preserving the sovereignty and independence of the Republic of Armenia. And our task is to prove that, yes, democracy is capable to ensure the country’s external security and internal security. In this respect I want to highlight the peace agenda which was adopted by the government of Armenia and for which the citizen of Armenia gave a mandate. In general, I think that the formulation of the peace agenda and its discussion is very important also in the logic that eventually, the citizen makes the important decisions in the country, as I said, in accordance with the democracy rules, the Constitution and the legislation. It’s very important that we give complete and proper information to the citizen so that he/she is informed enough while making decisions. Recently and quite often we touch upon issues relating to the peace agenda, the negotiation processes, the history. Some interpret this as a debate between the previous and present leaderships. But it has nothing to do with it. And our government, our political team considers it its duty to provide citizens with sufficient and proper information about what has happened with us so that the citizen is aware of the problems deelpy and makes the decisions he/she should make in the future. The citizen of Armenia made the decisions based on the analysis of this information”, the PM said.

Pashinyan said that for many years they fought for the establishment of democracy in Armenia and carried out their mission, however, “it is not over yet”.

“Now, in order to strengthen democracy, it’s very important that we unite around one more mission. As we have brought democracy to Armenia, so let’s bring peace to Armenia, because I think that one can exist without another with a great difficulty. And I can at least state with pride that there is a political leadership in Armenia who is united around this mission. I think that all democratic forces in Armenia should gather around this mission because one is a continuation of the other. This doesn’t mean that we should have the same opinion and vision on all issues, but I think that at this stage it is highly important that we sincerely, by looking at the eyes of each other, analyze the history of our country of the past 30 years and be able to do this in an atmosphere of sincerity and honesty. Democracy creates sufficient conditions for this. Therefore, the continuation of our mission of democracy is our mission of peace which is much heavier, much more difficult and requires much more strength and will. I believe and I am convinced that we will implement this mission as well because if there is no belief, there will also be no readiness to take and bear the responsibility”, the PM said.