"European Night of Museums" at the Alexander Spendiaryan House-museum 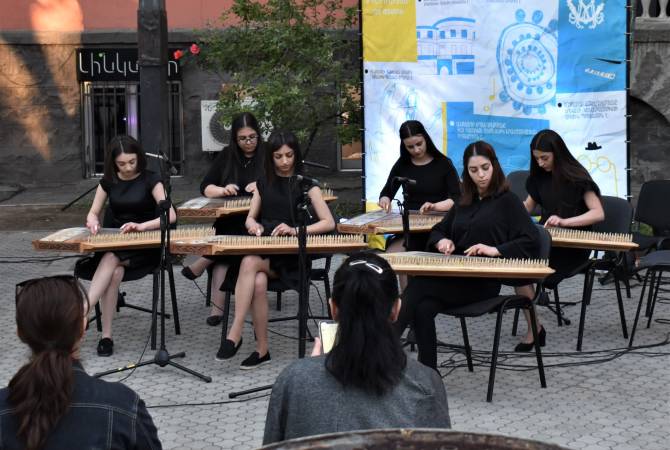 
YEREVAN, MAY 23, ARMENPRESS. On May 21, 2022 in the frame of the project "The story of an exhibit" the visitors of the first memorial musical museum of Armenia were represented two unique exhibits: the model of the Araratian Patriarchal Diocese residence with the audio guide in three languages and the Manifesto of the Emperor Alexander II with a video entitled "Spendiarovs - hereditary honorary citizens of the Russian Empire" in two languages.

Following the tradition of the Museum Night, the visitors tasted the "Cocoa according the recipe of Spendiaryan."

In the frame of the all European event the second project of the House-museum was the "Meeting at the balcony of the composer." The guests of the project were the pianist, RA Honored artist Hayk Melikyan and producer Alexander Plato Hakobyan. They shared their experience and career advices with the young musicians - scholarship recipients of the "Music For the Future Foundation" in the warm and friendly atmosphere.

Every year an evening open-air concert takes place at the Alexander Spendiaryan House-museum yard in the frame of the "European Night of Museums." This year was no exception.
The participants of the event were the vocal soloists and folk ensembles - the students of the Yerevan Music School named after M. Mirzoyan, State Musical Pedagogical College after A. Babajanyan, State College of Culture and Arts named after C. Aznavour and Komitas State Conservatory Chair of Jazz/Pop music. The concert was dedicated to the 120th birth anniversary of Artemi Ayvazyan - the founder of the Armenian Jazz music and the student of Alexander Spendiaryan. The program included Armenian folk music and favorite Jazz-pop compositions by the Armenian composers. During the concert the directors of the House-museum and the College of Culture - Marine Otaryan and Vrej Kirakosyan signed a Memorandum of Cooperation between the two institutions.