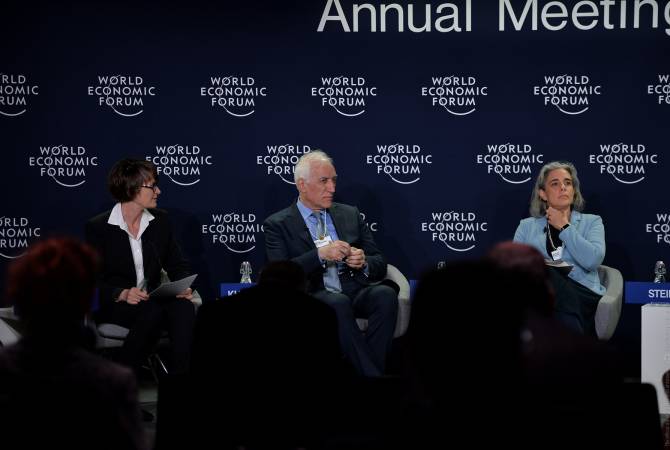 
YEREVAN, MAY 25, ARMENPRESS. President of Armenia Vahagn Khachaturyan delivered remarks as a keynote speaker at the discussion titled “A Cost of Living Crisis” during the World Economic Forum in Davos, Switzerland, the Presidential Office said.

Presenting Armenia’s experience and past path, the President said in particular: “Till now Armenia is regularly facing crises, which it tries to overcome in a special way. We have closed border, and this greatly affects our life quality. The talk is about Turkey and Azerbaijan. We have an unresolved Nagorno Karabakh conflict, which constantly keeps us in a conflict with our neighbor Azerbaijan. Just one and a half year ago the 44-day war provoked by Azerbaijan caused heavy human and material losses to us, the war stopped only after the mediation of Russia.

Now we are in a new crisis, but we are able to overcome it because the democratic principles adopted by us allow it to us.

The most important are the relations between the leadership and the society, to what extent society trusts the government and how well the government understands the problems of its society. If there is a dialogue between them, both the issue of poverty is being resolved, the possibility of new crisis is declining and the country is becoming more stable and manageable.

The most important is not to betray the principles. The experience of our country proves this.

From 2000 to 2018 our country refused from democratic values, and corruption ate the country in the true sense of the word. We appeared in an extremely bad situation. The velvet Revolution took place in 2018, as a result of which a young government came to power, by giving a new impetus to all sectors, business felt freedom, people felt freedom, people were able to do a business freely, no one could obstruct them, demand money, the political forces had a chance to participate in elections with equal conditions. The economy registered 7.5% growth immediately next year. Businessmen understood that the government is not working with them with the rules of temporary game, but with adopted laws and rules which suppose paying taxes on time and fulfilling some social duties. This is an example that everyone could be interested in. The elimination of corruption was a great impetus.

When all the money spent in countries reaches people who need it, both the poverty, the risks are declining and everything becomes more manageable. But if it reaches a group of people who just use it for keeping power, it could result in major conflicts. Of course, there are political motives that in many cases turn a blind eye, but I don’t think that this is a right solution in such cases.

It’s better to be honest, sincere especially with those people whom you want to provide that help and participate with them in all that programs”.