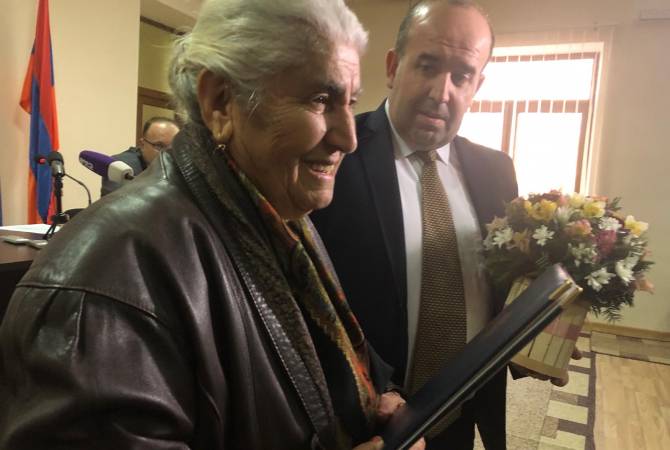 
GYUMRI, DECEMBER 20, ARMENPRESS. The sole resident of the village of Norshen, which borders Turkey in Armenia’s Shirak province, was honored today for her selfless devotion and many years of work.

At a yearend event at the provincial government headquarters, on behalf of Prime Minister Nikol Pashinyan, Governor Tigran Petrosyan awarded 83 year old Vahandukht Melkonyan with a certificate of appreciation and a half a million dram award for her “selfless devotion to her native land”.

Visibliy moved and full of emotions, Mrs. Melkonyan said this is the first time she is getting so much attention. She has been living in the village for more than 60 years.

Despite being the only resident of her village, she says she doesn’t feel lonely. The woman is a beekeeper and farmer. “It was hard in the beginning, now it has become usual”, she said, noting that the village emptied gradually. She says she feels herself “the most protected person”, since the village is under the supervision of Russian and Armenian border guards.

She is described as the only protector of the abandoned village.

Visitors will no longer need to have special permission in order to enter Norshen, the village in Armenia’s Shirak province bordering Turkey.

The Akhuryan River runs in between the village and Ani, the ruined Armenian medieval city in Turkey. Visitors to the village are required to obtain permission to do so from the Russian border troops who are patrolling the Armenian-Turkish border from the Armenian side.

But according to Shirak Governor Tigran Petrosyan, the procedure will change next year as a result of joint work of the Prime Minister, the Minister of Territorial Administration and Infrastructure, the Shirak Government and other authorities.

“Today I have a very important mission: I am announcing that from next year people can freely go and see Ani”, Petrosyan said, referring to the fact that the medieval city can be seen with the naked eye from Norshen due to its proximity.