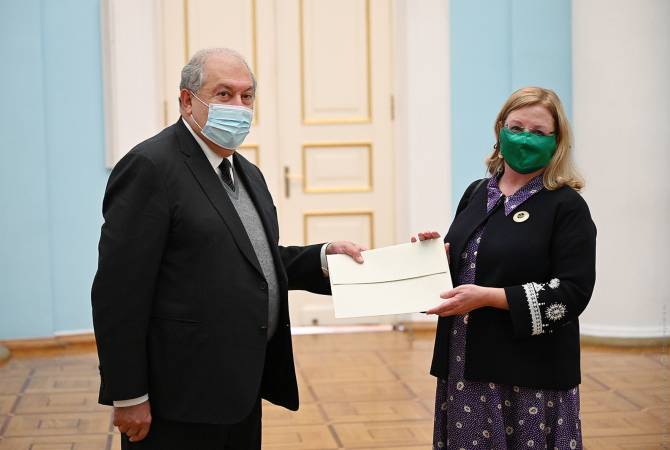 
YEREVAN, OCTOBER 19, ARMENPRESS. The newly appointed Ambassador Extraordinary and Plenipotentiary of Ireland to the Republic of Armenia Martina Finney (residence in Sofia) presented her credentials to President Armen Sarkissian.

As ARMENPRESS was informed from the press service of the President’s Office, congratulating the newly appointed Ambassador on the assumption of the mission, President Sarkissian stressed the importance of further strengthening the Armenian-Irish relations and expanding the bilateral agenda, emphasizing that the Presidential Institute is ready to support the initiatives aimed at developing cooperation within the limits of its powers.

Ambassador Martina Finney noted that her country is interested in deepening cooperation with friendly Armenia and expressed readiness to make her personal contribution.

Emphasizing that the two countries have a great potential for deepening relations, the interlocutors particularly considered the cooperation in the fields of high technologies, artificial intelligence, biotechnologies. The implementation of steps to strengthen cultural ties was especially emphasized. In this context, the sides referred to the prospects of organizing events presenting the historical and cultural heritage of the two peoples.