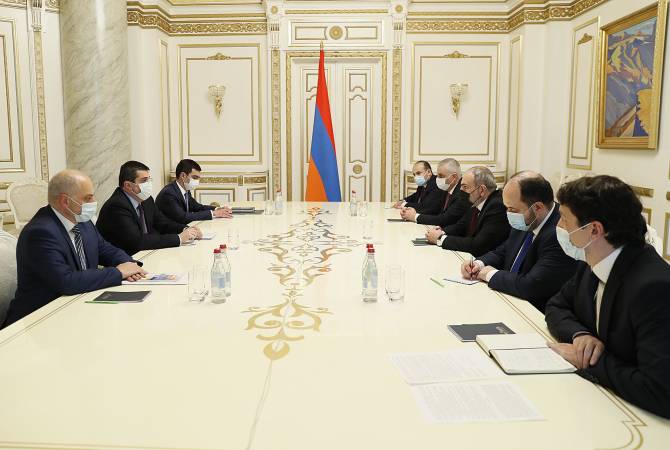 
YEREVAN, JANUARY 24, ARMENPRESS. Prime Minister of Armenia Nikol Pashinyan and President of the Artsakh Republic Arayik Harutyunyan held a consultation on the solution of social and infrastructural problems in Artsakh, ARMENPRESS was informed from the Office of the Prime Minister.

Glad to see you. We are at a very important stage of cooperation with Artsakh. After the 44-day war, the Armenian Government is much more actively involved in solving the socio-economic problems of Artsakh. And, if I remember correctly, Artsakh's annual budget for 2022 is unprecedented, which, in fact, is natural, because post-war rehabilitation is, first of all, very important, of course, it will naturally require a lot of effort from us. And I think this is normal.

I want to emphasize that in 2022 the Armenian Government will provide budget assistance of about 144 billion AMD to Artsakh. In 2021, it exceeded 100 billion AMD. It is very important and we have discussed many times to move from the stage of management of a possible social crisis to the logic of development, trying to place our cooperation into this logic, to implement development programs in Artsakh.

I'm very happy about this discussion. By the way, this is not our first discussion on this topic. We have had many discussions, some of them were purely working discussions, which were not covered, the rest were covered. I think in general we can state that the programs are implemented effectively.

The war, the aftermath of the war came as a supplement. And in that sense, we can say that at least we have been able to maintain the situation in a certain area of manageability through joint efforts, so as to rule out the emergence of humanitarian crises in the post-war situation."

In his speech, President of Artsakh Arayik Harutyunyan said,

First of all, I would like to thank the Government of the Republic of Armenia again for solving the social problems during the war and in the post-war period. There have been no problems in terms of healthcare, accommodation, and other issues, regardless of the amount of benefits provided.

We have always felt that the support of the Armenian Government, its members and all officials in general has always been visible for the people of Karabakh during that difficult period. And in the post-war period we have done everything to be able to solve our most difficult problem - to give the displaced population the opportunity to first find temporary asylum in Artsakh and Armenia, and, of course, to provide radical solutions afterwards.

Mr. Prime Minister, let me note that in 2022, to be precise, 140 billion AMD, was provided to the budget of Artsakh as an interstate loan or direct grant. In addition, the Government of Armenia, through the programs of the Ministry of Labor and Social Affairs, implemented numerous social programs directly. That's why the number is so large, thanks to which we managed to prevent emigration and solve even more important problems today.

I would like to mention, Mr. Prime Minister, that the construction of 300 apartments has already been completed, which have been handed over firstly to the displaced families and families of the victims, and secondly to the vulnerable families. Construction of 3000 houses has kicked off. We have renovated and provided about 500 apartments from the old, free fund in the villages, about 2000 apartments are already being designed, which we will start in 2022. In other words, with that 5,000 housing construction program, we will mainly solve the problem we have set before us by also reopening the old funds where no one lives.

By the way, Mr. Prime Minister, let me note that, yes, in the case of 144 billion AMD, we will be able to solve the existing problems, not only housing. We have started very ambitious programs. The Badara-Stepanakert pipeline is already under construction, which will completely solve not only the issue of quality drinking water for Stepanakert, but also the mentioned settlements under construction, some of which are located in the vicinity of Stepanakert. At the same time, the construction of the Badara Reservoir has already started, which is an unprecedented event in the history of independent Artsakh. The works on the canal called Sovetar is nearing completion, which will provide an additional opportunity for irrigation of 3,000 hectares. And at the same time, as you mentioned, in terms of implementing economic programs, we are doing our work in the direction of numerous artesian wells, so that agriculture, which should become the locomotive of our economy, can move forward.

It should be noted in terms of Base Metals, that it is already operating at a capacity of 70-80%, according to the planned. The issue of water and energy supply has been solved, the state budget revenues in 2021 amounted to 34 billion against the 17 billion prediction.  We have planned 40 billion this year, but, of course, our expectations are much higher. At the same time, we are developing greenhouses and other areas through various charitable programs and cooperation.

In general, Mr. Prime Minister, the pace of housing construction corresponds to the volumes that we have discussed together and reached an agreement. At the same time, the Hayastan All-Armenian Fund is building 1,061 apartments, as well as other infrastructure projects, water pipelines in other villages and other settlements, and asphalting works are underway. In other words, infrastructural projects are being implemented in all areas, including housing. We managed to solve the most important problem - the issue of electricity, we have been able to maintain the situation almost uninterrupted so far, because it was difficult in terms of capacity supply, provision, etc. If there is no force majeure, that problem will be solved, given that we have also been able to supply the necessary power to "Base Metals".

In general, I would like to express my satisfaction, Mr. Prime Minister, in terms of the established cooperation. We are always in touch with those in-charge. Thank you."