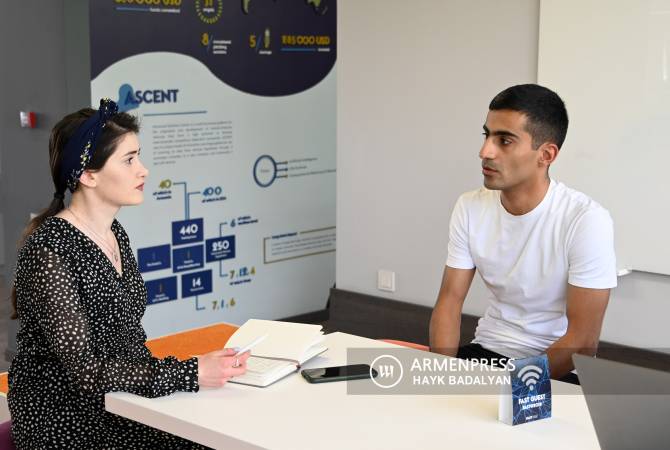 
YEREVAN, MAY 18, ARMENPRESS. For about two years the joint project of the Foundation for Armenian Science and Technology (FAST) and the Armenian Ministry of Defense gives new opportunities to pre-conscription age men to serve their scientific, technological, engineering and math knowledge in the targeted sectors of the Armenian Armed Forces.

FAST organizes trainings 6 months before each draft. This 6-month training is free of charge and is a wonderful educational and professional opportunity for future conscripts to prepare as much as possible for the entrance exam to the "Unit 1991" that is organized by the Ministry of Defense. Participants, who successfully complete all the exams, start service in the Unit.

Speaking to ARMENPRESS, one of the program trainers Nshan Potikyan said that the preparation courses started in January 2020. “The courses allow all future conscripts to deeply study the directions of data science and artificial intelligence, by paying great attention to the respective sections of higher mathematics and programming”, he said.

Potikyan said one of the goals of the project was to ensure continuous education, because now pre-conscription age men, after entering a university, are immediately drafted into the army. That’s why the necessity of this training emerged so that these men serve in the special unit and also continue their professional education.

Talking about the opportunities of the course, the specialist said that those participants, who fail to enter into the service in the "Unit 1991", get knowledge in any case and at least understand what is artificial intelligence. As for those who succeed, they gain much more knowledge and skills during their service years, as well as bring their contribution to important projects in the Armed Forces. And most importantly, he noted, that these men start their future career from an early age.

“The program is intended for pre-conscription age men and young women who have at least a Bachelor’s degree in science, technologies, engineering and mathematics and are ready to join the Defense Ministry’s projects after the completion of the course on voluntary or contract basis. Applicants, who pass the stages of testing and interviewing, participate in the 6-month and 12-month free course on data science and artificial intelligence”, Potikyan said.

Alexander and Hovhannes, who participated in the previous stage of the preparation course, are currently waiting for their turn of conscription in direction of machine learning and artificial intelligence.

They say that the project enabled them to study and specialize in mathematics and to some extent in programming. It also allowed them to enter into the world of artificial intelligence they had no idea about before.

The current participant of the course Koryun said he had no idea about artificial intelligence before. “By learning about the project I applied and now I am very happy because I get a lot of knowledge and I am sure that we will become a specialist to some extent after the completion of the project”, he said.

A total of 410 young people participated in the preparation courses of the Unit 1991. A new admission is expected soon and will be announced in advance.