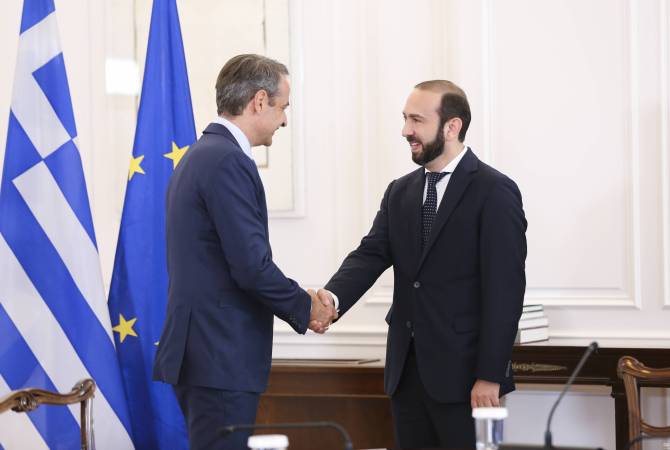 
YEREVAN, JUNE 27, ARMENPRESS. Minister of Foreign Affairs of the Republic of Armenia Ararat Mirzoyan, who is in Greece on a working visit, held a meeting with Prime Minister of the Hellenic Republic Kyriakos Mitsotakis on June 27.

As ARMENPRESS was informed from the press service of the MFA Armenia, the interlocutors stressed that the Armenian-Greek relations are based on friendship, mutual support and common values.

Ararat Mirzoyan and Kyriakos Mitsotakis commended the rich agenda of cooperation and the high level of political dialogue, expressing readiness to make joint efforts towards further development of cooperation and its promotion to a qualitatively new level.

They also touched upon the current level of trade and economic relations between Armenia and Greece, the prospects of further expansion of economic ties, including through the utilization of the opportunities of a wide legal field, the works of the Armenian-Greek intergovernmental commission and activation of business to business contacts.

They have also discussed cooperation within the framework of the Armenia-Greece-Cyprus trilateral format.

The Foreign Minister of Armenia briefed the interlocutor on the current developments in the South Caucasus. The sides exchanged views on the issues of the Nagorno-Karabakh conflict, the process of normalization between Armenia and Azerbaijan, the unblocking of regional economic communication and transport infrastructure, the work of the commissions on delimitation and border security.

Ararat Mirzoyan touched upon the humanitarian consequences of Azerbaijan's military aggression against Artsakh, accompanied by gross violations of international humanitarian law. Among other urgent issues, the need for the repatriation of the Armenian prisoners of war and other detainees and preservation of the Armenian historical-cultural and religious heritage in the territories fallen under the Azerbaijani control was stressed.

The Foreign Minister of Armenia highly appreciated the support of the Greek government during the 44-day war - a challenging period for Armenia, as well as its assistance in overcoming the resulting humanitarian issues.

Minister Ararat Mirzoyan also briefed the Prime Minister of Greece on the developments in the Armenia-Turkey normalization process.