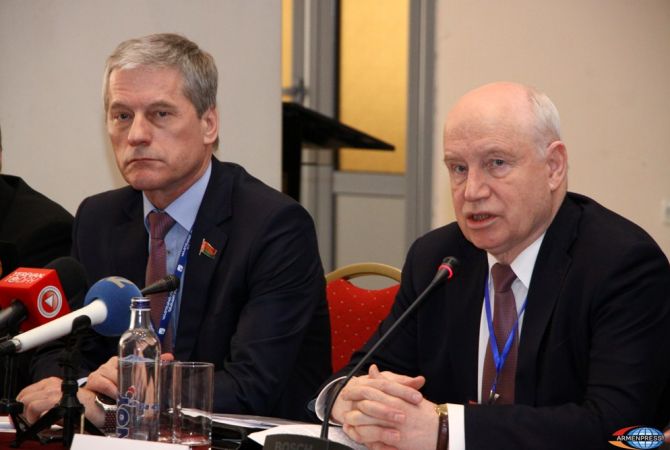 
YEREVAN, APRIL 3, ARMENPRESS. The changes in the Electoral Code of Armenia and the technical innovations increased the level of trust among citizens even more regarding the election results, Sergey Lebedev, chairman of the CIS executive committee, head of the CIS observer mission told reporters, presenting the assessment of the observer mission representatives.

“We began our work since March 14, meaning in terms of time we had the chance to follow the preparation works of the election and the voting itself. Our committee has scrutinized the new Electoral Code, and we would like to say  that innovations were made which are seen for the first time among CIS countries, that’s why we were also waiting to see how these innovations would act during the election”, he said.

The head of the observer mission mentioned that the observer group included a group of diplomats, experts, representatives of various structures and others.

The observer group has monitored all provinces.

“I would like to mention the assistance of the Central Electoral Commission as well as agencies responsible for the election, since we were receiving what we needed, materials which were necessary for studies, meaning we had a rather good, comprehensive understanding regarding the election and the preparation works. I think the innovations which were used during the election, were aimed at holding the election more free, open and transparent. Of course, certain overcrowdings, technical issues also happened, relating to the device identification, however those weren’t the type of difficulties which would impact the election process. Members of the commission were immediately able to resolve the situation”, he said.

Sergey Lebedev said they have been to over 1215 polling stations, where other observers contributed to understanding the situation.

“We were at the polling stations also during certain period of time of the vote counting. Also as a positive side I would like to mention the presence of observers in polling stations, with whom we were also cooperating, we were asking whether or not they have noticed violations. And the assessment, which we have regarding the election process, is also based on cooperation and interaction with observers. We can say that the election were overall held calm and organized, the introduced innovations, which were aimed at improving the process, contributed to the transparency of the process and exceeded even Western countries, who were teaching us how to correctly organize elections. I would like to underscore that we are guided by the legislation of the country where we are carrying out the observing. We do not give any political assessment. For us, it was important to observe the overall process, to what extent it is democratic, to what extent the citizens’ right to free expression of will is ensured. We did it, and, overall the organization of the election allows to conclude that the citizen’s right to free expression of will is maintained, and the election was held free and transparent”, he said.

Lebedev noted that certain polling stations were located in the 2nd floors of buildings, which posed a difficulty for the elderly and people with disabilities. He proposes to use the example which exists in CIS countries’ territory, which is to have mobile voting booths, which members of the commission would take to those areas were elderly and people with disabilities live, facilitating their participation in the election.