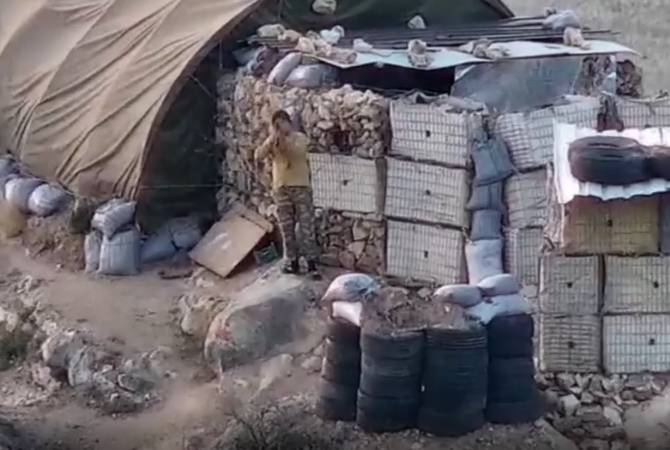 The National Security Service of Artsakh said in a statement that the Azerbaijani military began committing provocative actions and intentional ceasefire violations from the beginning of October of 2021.

The video shows an Azeri soldier firing an AK-74 assault rifle at the Armenian positions while another Azeri soldier is hiding behind the DFP. After firing several rounds, the shooter can be seen laughing before resuming the shooting.

The Azeri provocations began when the Azeri forces shot and killed a farmer in Martuni, and then continued ceasefire violations in other parts of the line of contact. The NSS said that the Azeri soldiers are now explicitly aiming to kill in the ceasefire breaches, whereas previously they’d shoot as a warning.

“Yesterday, Azerbaijani troops deployed in a position near the Nor Shen community of Martuni region shelled an Armenian position nearby deployed with the purpose of protecting the village population. The nearly point-blank range shots were fired so explicitly that the surveillance cameras of the Armenian side caught it on video,” the NSS said, stressing that the images prove that the Artsakh Defense Army adhere to the ceasefire agreement, whereas the Azeri side is intentionally violating it.