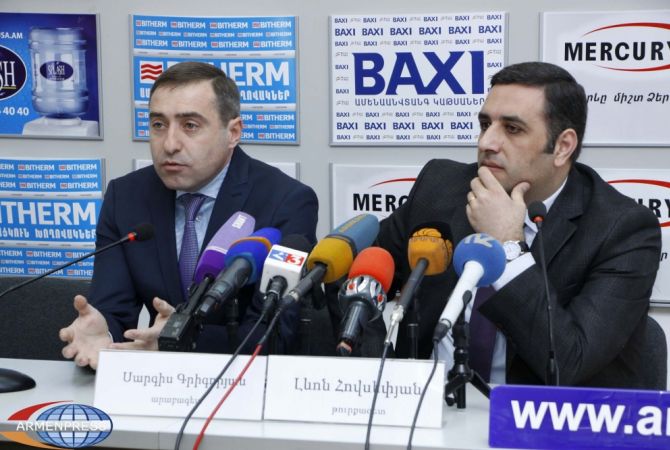 
YEREVAN, FEBRUARY 17, ARMENPRESS. Turkey has appeared in a deadlock. Turkish calculations and plans over the Syrian issue have failed, and it seriously troubles Ankara. Expert in Turkish studies Levon Hovsepyan mentioned about this in a press conference at “Armenpress” media hall. According to him, application of artillery by Turkey at the positions of Syrian Kurds is conditioned by those troubles.

“Turkey’s operations against Syrian Kurds contain some elements of blackmail, as well. Those are acts directed against the USA. Doing this, Turkey tries to show the USA that there are disagreements over Syrian Kurds, but it can act on its own even in case of disagreements with the USA”, Levon Hovsepyan said.

The expert in Turkish studies noted that developments in the northern Syria are not  in Turkey's interests.There is a concern that the USA and Russia may reach an agreement over Syrian issue and Turkey will be outsider in that case.

“Hence, Ankara attempts to solve some problems exercising various mechanisms. The first mechanism was the bombing of Syrian Kurds. We see that the grip tightens around Turkey and it can launch unpredictable activities. In fact, Turkey has invested immense resources during those years and now it is on the threshold of failure. Ankara is facing a dilemma. Either to wage ground operations or wait. In both cases the consequences will be severe for Turkey”, Hovsepyan added.

“We see that fierce clashes go on in Syria. The coalition headed by the US, Russia’s constant air strikes, advance of government forces. Ankara, Saudi Arabia activate, announcing about their readiness to launch ground operations, they already conduct military exercises. Hence, by and large, there is no ceasefire”, expert in Arabic studies Sargis Grigoryan said.

He noted that in this situation a positive tendency can be noted. Those developments shed light on those underlying processes that in reality exist.

“Right, the international community is focused on “Islamic State”, but there are other groups there which are by no way inferior to the Islamic State. Those recent developments pushed Turkey and Saudi Arabia to actively make announcements and take some specific measures. The information that great quantities of armaments are transferred from Turkey to Syria can be viewed in this context”, Sargis Grigoryan added.

The expert in Arabic studies stated that the Armenian community in Syria can become target of the Turkish operations. It is not excluded that Turkey will direct its bombardments at Christian populated districts of Aleppo.